Less than two weeks into my hydroponics project, I can easily surmise the life of a farmer. It’s hard work. Now that all of the supplies are here, I can start growing lettuce. This is shaping up to become one expensive salad. I just don’t get how lettuce is so cheap. With all of the details involved in this project, I’m surprised that a head of lettuce isn’t $10. The next time I walk into a grocery store, I feel like I’m going to have a much different perspective.

Even just to get to this point was an effort. I placed my order on April 2, but all of the items didn’t show up until today. Since I was using Amazon’s free shipping, that was to be expected. However, there were trips to Lowe’s, Home Depot and even Petco. I was looking for Hydroponic supplies. While these retail outlets were not really geared for such a project, I was able to get a nice little setup for germinating the seeds. My setup is like plantception – it’s a greenhouse, inside a greenhouse, inside a house.

That negative association is annoying. However, there’s something far worse – cleaning the rocks. The Viagrow “4 Site Deep Water Culture Vegetative Bubbler System” comes with “ViaStones” as the growing medium. Since I’m already freaked out about containments, algae and mold, I went through the tedious process of cleaning the clay rocks. Viagrow sent way more than I needed to fill the four net cups.

I imagine that part of my frustration was just a matter of getting setup. Part of the trouble was figure out how to configure the timer. I can easily imagine an advanced hydroponics setup rivaling the electrics of a festive Christmas lights display. Even with just a single timer, it was tough to setup the outlets. I have a 4-outlet box, but the GE timer was blocking more outlets than it used. It took a bit of fumbling, but my poor man’s robot is setup. The lights go on for 16 hours a day and rest for 8 hours. 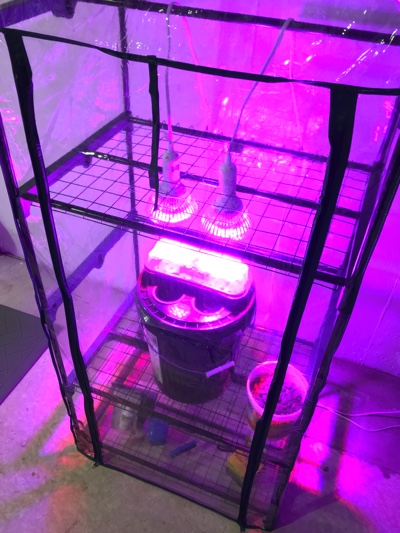 I was impressed with the LED lights. Although, the color is very purple. The red and blue lights, which are great for plants, are not normal for humans – unless you’re in an arcade or disco. I’m not sure if one light would have been enough, but now I have two. They completely saturate the growing area with light.

I feel like the larger greenhouse is a bit overkill. Perhaps when this experiment is over, I could just put the larger greenhouse outside. I’ve been learning about the Kratky method and it seems that I don’t even need electricity or air bubblers. But so far this season, the outdoor plants have not been doing well. While March was fairly warm, April has been quite erratic. 30º temperature spans in 24 hours were tough on the tomatoes – especially with dips into freezing temperatures. This experiment is to see if I can grow plants regardless of the weather outside. Maybe I want fresh tomatoes in January. But if I want fresh tomatoes in my backyard this Summer, my little indoor setup could help with catching up.

With the little lettuce seeds planted, now I just wait. The seeds were so tiny. I didn’t even know what lettuce seeds looked like – or even that lettuce had seeds at all. It’s funny how I just take food for granted. The amount of effort required by this project certainly does make me appreciate food more. Theoretically, I should be eating leafy greens in about 30-45 days from now.