At the local mall, there’s a kiosk for “As Seen on TV” items. In a bright yellow and triangular shaped package stood the Wallet Ninja. It reminds me of an old photography saying. “The best camera is the one that you have with you.” It’s the same with tools. My mobile phone has replaced so many tools. It’s a camera, but it’s also a flashlight, GPS, compass, music player and more. What if the Wallet Ninja (a credit card shaped multitool) worked the same way? Since it was only $10, I thought that it would be cool to try it.

I’ve been impressed and disappointed by “As Seen on TV” items before. I wasn’t quite sure what to expect here. While the Wallet Ninja is incredibly cute, it was not as effective or practical as I had hoped.

And yet, the “Letter Opener” (the first feature I tested) did a poor job of opening an envelope. The paper kept getting bunched up against the cutting edge of the ninja wallet. I was wondering if the sharp edge was on the wrong side. But more importantly, it’s not a very long edge. It seemed easier to just tear open the letter with my fingers, as the Wallet Ninja wasn’t creating a clean cut.

I then tried the “Cell Phone Stand” feature. The slot for inserting a card is wavy, as to hold the card in place. I had an old credit card to experiment with and it’s a good thing that I did. The card didn’t slide in easily. The embossed numbers and letters were jamming against the slot. Since it was an old card, I decided to just force the card in the slot. 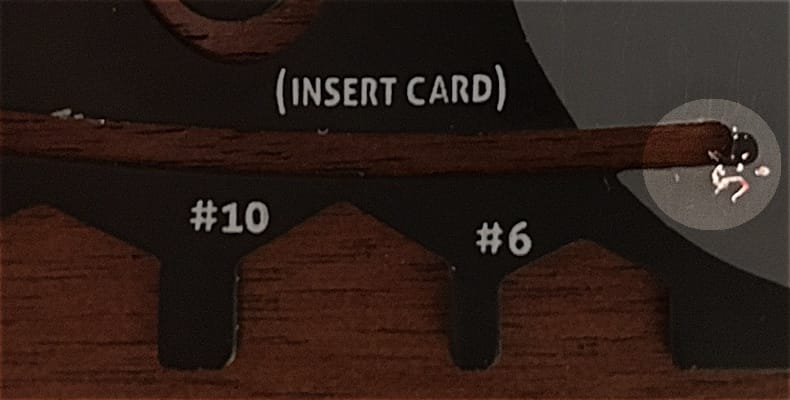 Credit card shavings ended up in the corner – right where the ninja drawing is located. It’s as if the ninja had cookie crumbs on his mouth. The Wallet Ninja also scratched the security chip. If you’re going to use this feature, I don’t recommend using an important card.

The “Cell Phone Stand” option was less trouble with my New York State driver license. It was thinner than the credit card, so the ID slid in to the slot easily. But unfortunately, the end result was a bit flimsy. The driver license bends, so the Wallet Ninja bends with it. That makes it difficult to control the angle of the stand. The way I fixed this problem was to use two thin cards. Together, the stand was more sturdy. Such a setup could be fairly useable, but I’m thinking that the Pocket Tripod is better suited for this task.

The screwdrivers worked as expected. It could be useful in a pinch. However, there are clear limits. If you have to get at a screw in a tight spot, it could be difficult-to-impossible to reach with the Wallet Ninja. Also, if you have a lot of screws to work with, your hands could start hurting from generating all that torque. When working with a large screw, I found myself using the center edge of the Wallet Ninja rather than the designated screwdriver spots.

While using the tool, I felt that the paint might scratch off. From what I’ve seen online, that is a concern. I wasn’t too rough with my Wallet Ninja. I wanted to keep it looking nice. As for the wrench-like slots, I don’t usually have to fasten bolts, so I didn’t test those tools.

Actually, a lot of the tools went untested. The tiny rulers, bottle opener, peeler and can opener features weren’t used. I didn’t have any fruit, cans or bottles to open. At least, there wasn’t an immediate need. Already down $10, I didn’t feel like wasting a perfectly good can of black olives, vegetarian beans or tuna fish.

It’s not that I think the Wallet Ninja was a total waste of money. Actually, I think it’s fun. I like it. I might have use for it, but not right at this moment. Maybe if I carry it with me, I might find practical applications for it. Also, the Wallet Ninja seems like a nice gift.

This certainly is an inspiration though, as I’ve been thinking about bringing back the Photics Toolbox. The Wallet Ninja seems like a success story. I’ve seen so much failure on the App Store that perhaps I’ve been overly critical of my work. The Wallet Ninja is not perfect, but I’m glad that it exists. It can be useful. Maybe my new app needs to exist and be useful too!

One thought on “Wallet Ninja Review”