It’s something of a New Year’s Day tradition. I’ll wake up on the first day of January, I’ll log into Guild Wars, stand around for a moment and then I’ll get a new hat. Wintersday is not as impressive as it used to be. That’s to be understandable. I’ve been playing Guild Wars since February 2004. It’s time for a sequel!

As I stood in Lion’s Arch, I began to think about Guild Wars 2. This is the year is supposed to bring a big upgrade to the franchise. ArenaNet has been known to make important announcements in January. I wonder what’s going to happen when the holiday is over. When will the beta start? Will there be new screenshots?

For now, I only have this screenshot to share with you 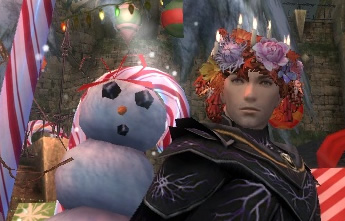 Here’s a picture of the Wreath Crown – A Wintersday Festival Hat. It looks weird on male characters. You can almost hear the snowman say, “WTF?!”

There seems to be some grumbling in the community about the design of the new Wintersday hats. I really don’t worry about it anymore. Do I really need another hat? However, Wintersday did put me in a festive mood.

For those of you in The Crusaders, I unlocked three more NPCs. The Guild Emblemer, Canthan Ambassador and Festival Hat Keeper NPCs were added to the Guild Hall. It cost 30 platinum to unlock those NPCs, but I figured it was a nice way to celebrate the holiday. The Guild Hall is perfect once again. All of the NPCs are unlocked.

2008 is a big year for the Guild Wars franchise. It’s a good thing too. I’m completely burned out on the original Guild Wars series.