With OS X 10.9 (Mavericks) just around the corner, today I fixed a problem that originated with an earlier version of the Mac operating system. There’s a cool RSS screensaver by Apple — the RSS Visualizer — but it wasn’t included with the latest version of OS X. I like RSS. Unlike Facebook, Twitter or other social networking websites, RSS doesn’t [usually] require logging in. RSS is less invasive. Apple’s RSS Visualizer was one of the more sexy ways to view an RSS feed, so I reinstalled it. The process was bit involved.

To restore the screen saver, I needed an older copy of OS X. I have both Leopard and Snow Leopard on disk. I tried looking for the RSS Visualizer file on the install CDs, but I couldn’t find it. What I did find was a blast of nostalgia. With a disk in the drive, my Mac Mini started making all sorts of mechanical noises. From all of the whirling and buzzing, I could understand why Apple has been phasing out the optical drive. Although, because I had original install disks, I had my own copy of the RSS Visualizer.

To get the “RSS Visualizer.qtz” file back, I installed Snow Leopard on my External hard drive. The software was a bit grumpy about that idea, as it didn’t want to install Snow Leopard on a drive that was dedicated for Time Machine. 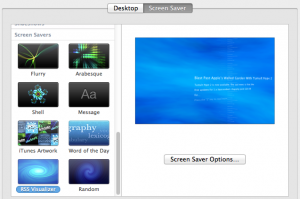 I decided to wipe my Time Machine drive. It was risky, but I figured it would be OK. So, I erased the external hard drive, installed Snow Leopard, grabbed the file, and then put everything back in its place. It took a significant amount of time, several hours actually, but now I have my favorite Mac screensaver back in action.

Naturally, I put the Photics.com RSS Feed as the option for the Feed URL. Surprisingly, the software still works. I’m not sure why Apple would kill such a cool option. It’s only 255 KB. Sure, RSS is something of a struggling format, but I haven’t seen a better alternative. And now that Google has given up on Google Reader, it’s been something of a renaissance for RSS readers. Lots of new RSS apps are available to fill the void. I use Thunderbird to manage my RSS feeds, but it’s plain looking. Apple is good at making technology sexy. Maybe that’s what RSS needs more of to grow.