Happy Labor Day, a day to not work and play video games. To celebrate, a new video was launched on Photics.TV. 👧🏽 How To Unlock The Ultra Annoying Schoolgirl In Crossy Road Castle Construction Tower — All Gems! The idea is to create a series of videos about unlocking the hidden characters in Crossy Road Castle on Apple Arcade.

But if you don’t like YouTube videos, here’s a text and image based version of the tutorial. The first thing to do is play through the levels. The levels with the green doors to the gem levels appear randomly. If you’re not sure how many gems there are left to collect for a particular castle, there’s usually a sign somewhere on the wall. The goal is to collect five green gems.

Sometimes the doors are hidden in plain sight. Immediately on the start of this particular level, there’s a green door. Beginners usually miss this secret door. Do you see it? After the explosion, you can slide down the falling beam and then take the alternate exit. If you’re new the game, and you’re playing with other players, don’t always run for the yellow door. If you don’t see the other players following you, they might be heading towards a hidden exit.

That secret green door leads to a bucket level. The trick is to blast from bucket to bucket. If you miss, then you can’t reach the gem. This is one of the easier gems to get, as long as you don’t miss. Timing is key. But if you’re off with your aim a little bit, you can slightly steer the character to correct your trajectory. That’s why I like to wait until the buckets are heading toward the edge. With a drift towards the corner, it’s easier to catch the moving bucket.

After the last bucket, blast to the gem. I already collected this one, so it doesn’t show as a green gem. Previously collected gems are worth one token.

A side note, I have no idea what this little guy is doing in there. Maybe he’s an office worker, but there’s no door. Is he trapped? You’re not trapped though, just fall down the side to exit the level. But as you fall down, aim for the middle of the two columns of coins to collect them all.

It’s a good idea to keep a lookout for those little guys, as another on another level will trigger the explosives. When that happens, just fall to the right. There’s a green door on the side. 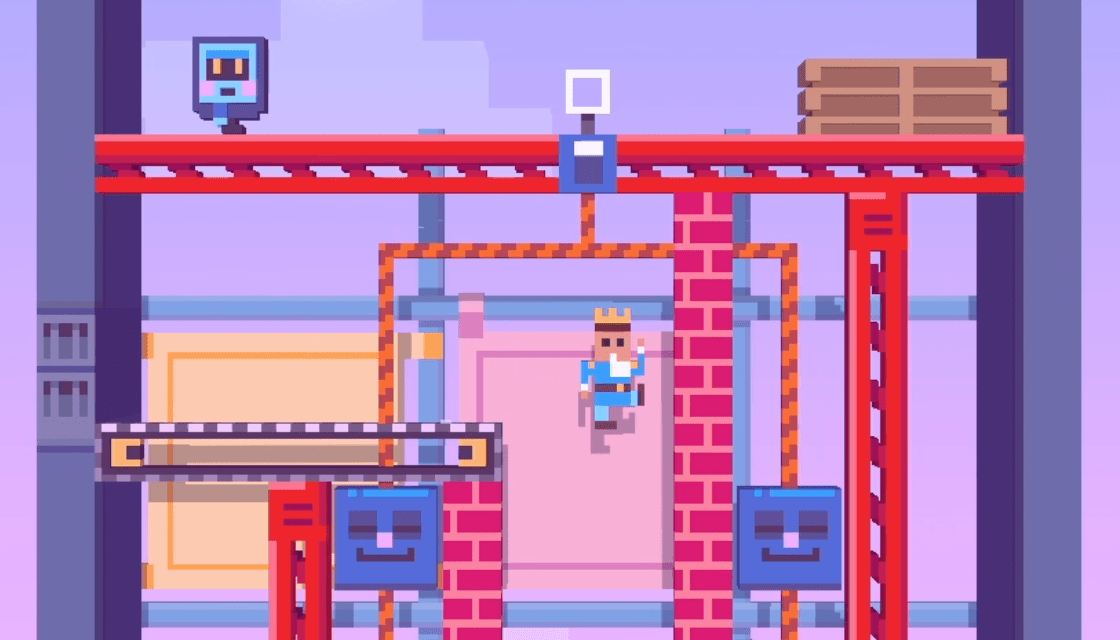 That will lead to a room with two bombs and two triggers. It’s easy to collect the gem from this secret level. Just follow the fuses to choose the correct detonator to use. The trick is to explode the bomb on the right. If you’re patient and smart, you can’t screw it up. But sometimes, the other bomb is rigged to explode too. So, don’t just stand around.

Next, play through the game until you see lots of vertically moving platforms. Sometimes they move up, sometimes they move down. The difficulty is random. But either way, this one is not too challenging. Just jump towards the green door at the top-left. 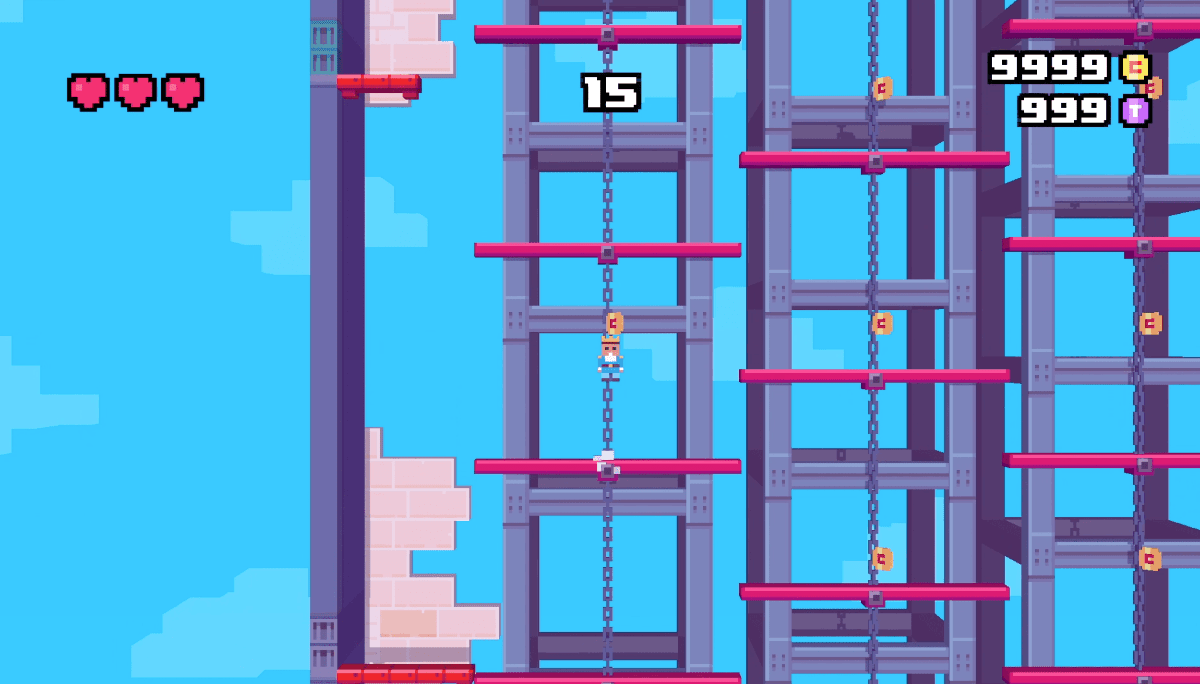 This leads to a secret level that is like the classic arcade game Space Invaders, except birds are the enemies. Jump in the bucket and blast upwards to knock them out of the sky. However, for our gem quest, we’re not really interested in the birds. Rather, it’s the gem that floats in from the left side. There are two main challenges here. The first is getting to the gem before it leaves the area, and the other challenge is not falling down before getting the gem. This level is flexible. You can take multiple shots to get the gem and destroy all the birds.

The fourth gem can be found from a level that looks like this. Basically there are crumbling yellow platforms with roaming blue enemies. This level can be easy or somewhat difficult. This time, it’s the latter. The extra challenge is jumping off the enemy to reach the platform with the green door. Sometimes, the level is easy and you can simply jump up. Either way, this is the alternate exit.

It leads to a long conveyor belt with a speeding red car. The challenge of this hidden level is to reach the car before it drives off. The trick is to jump on the upper conveyor belts. And if you’re having trouble timing the jumps, look for the signs with yellow arrows. What’s nice about this level is that you don’t need to be absolutely perfect. If you make a mistake, you still might be able to catch the car.

For some of the gems, there could be alternate paths to their secret levels. Basically, just be on the lookout for green doors.

Collecting that last gem is a real challenge. Even just getting to the green door can be difficult, as it’s usually much later in the run. On my run, where I unlocked the Schoolgirl, the specific level didn’t appear until level 73.

It’s a level where you’ll be lifted up by a blue beam on a crane. Blue enemies will cross your path, distracting you from your goal. You don’t need to jump on their heads to make it through, but you do need to avoid them. This can be challenging, as there’s a small window of opportunity to make the jump. Just jump to the red ledge on the left side. That leads to the green door.

This is where the real challenge begins. The objective is to keep the enemy alive while lifting it up with the green propeller platform. It’s not the smartest of lifeforms either. It simply walks back and forth. Step on the white button to raise the platform, and step off to lower the platform. This is not exactly precise controls, as the change in momentum is not quite instant.

This level is nerveracking, as it takes a significant amount of effort to make it this far. After seventy levels, you might start getting tired. Failure here usually means repeating the run. But even with your full attention, and the best of intentions, it’s extremely difficult to prevent sudden death.

But if you’re successful, and you collected the other four gems, that should unlock the Schoolgirl.