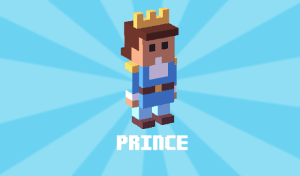 It’s been years since I enjoyed a video game like Crossy Road Castle. Apple Arcade is a lot of fun. So, I’m sharing that excitement with the world. It continues with the second part of the gem quest. In this part of the adventure, you can learn how to unlock the Prince from the Unihorse Castle. A video guide is available on Photics.TV (YouTube). 🤴🏻 How To Unlock The Prince In Crossy Road Castle — Unihorse Castle (All Five Gems + Achievements)

Welcome to part two of the Crossy Road Castle gem quest. In this second video, the goal is to unlock the Prince. Crossy Road Castle is a game from Hipster Whale, on Apple Arcade. In the previous adventure, we unlocked the Schoolgirl character from the Construction Tower.

This time, the goal is to collect all the gems from the Unihorse Castle. Even knowing where to go, this can still be quite a challenge. But that challenge starts at the beginning, so you can start by playing through the game as normal. As you travel through the levels, be on the lookout for alternate exits. In other words, find the green doors.

Here’s one on level 3 of this particular run. Even though it’s visible as soon as you enter the room, this one’s easy to miss. Instead of following the coins, which is usually a good indicator of where to go next, just slide down the side. Then, follow the secret path on the left side. The green door is at the end of five small jumps.

This bucket level has lots of coins. However, for this gem quest, only one location is of interest. It’s the eye of the Unihorse. The trick to this level is not falling down. At least, not until you’re ready. You can blast from bucket to bucket, collecting all of the coins.

There is a cap on the number of tokens and coins you can have. So, it may not be necessary to collect every last coin.

Here’s another easy gem to collect. Play through the Unihorse Castle until you see a column of birds flying like this. It’s tempting to smite all of them, but there’s a green door on the left. Just ignore the birds and fall to the left side to easily access the secret level.

This secret level looks a little complicated, at least at first. There are two walls blocking the way to the gem — a red wall and a blue wall. The trick is to blast to the switches to turn off those shields. Just jump in the middle bucket, wait until it reaches the edge, and then blast towards the switch.

Once again, the secret is not falling down. If your timing is good, you should be successful with this level. Remember that you can still move around while flying through the air, even if just slightly. This can help you guide your character to the switches and the buckets. 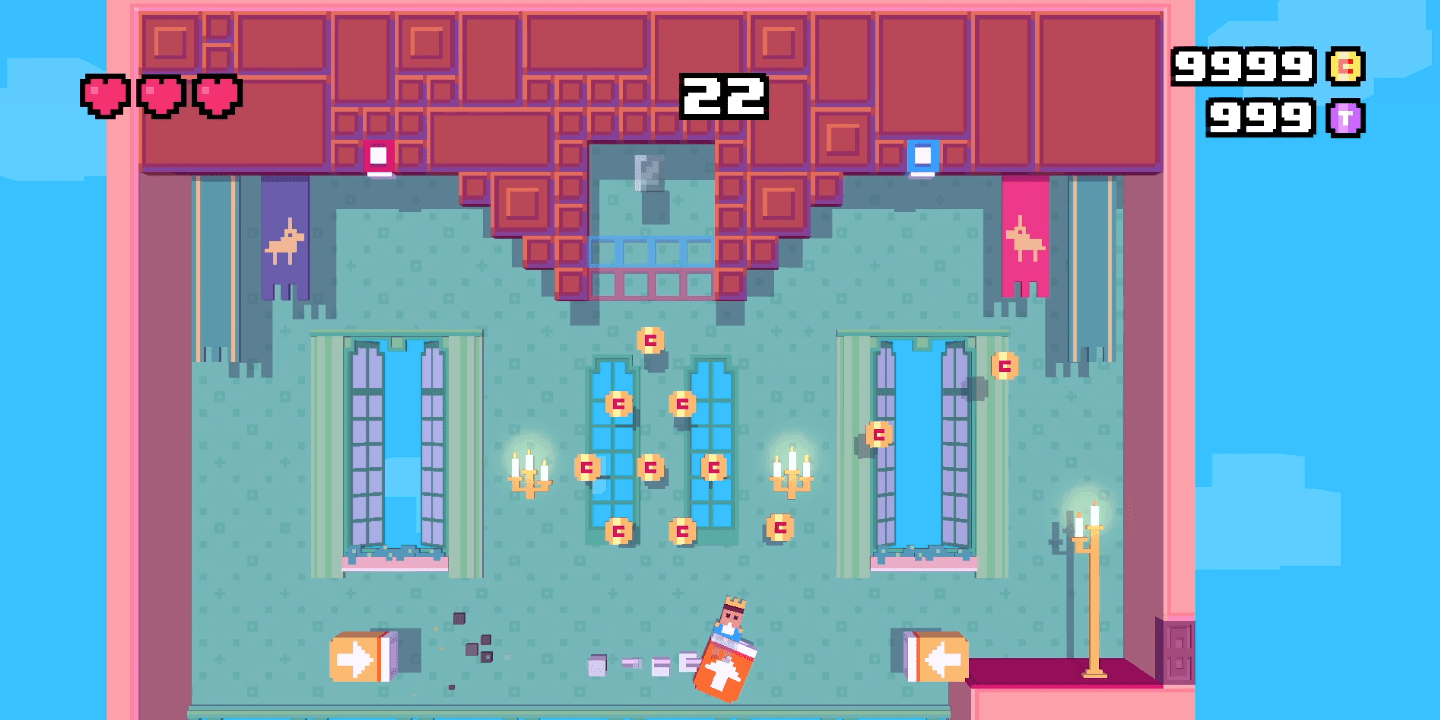 During this quest, you’ll very likely encounter the Bald Eagle Boss. It’s strange fight. Basically, you drift up a rainbow until you bump into the eagle. There seems to be a back story here, but I’m not sure what it’s about. The app’s description says, “Defeat an Oversized Angry Eagle: Why is it so angry?!”

Well, without further context, it seems that the bird was just sleeping and you woke it up.

Anyway, touching any part of the eagle will hurt her. Meanwhile, she will be shooting feathers and eggs at you. Just avoid them until you can hit the bird. Bump into the bird three times to win. 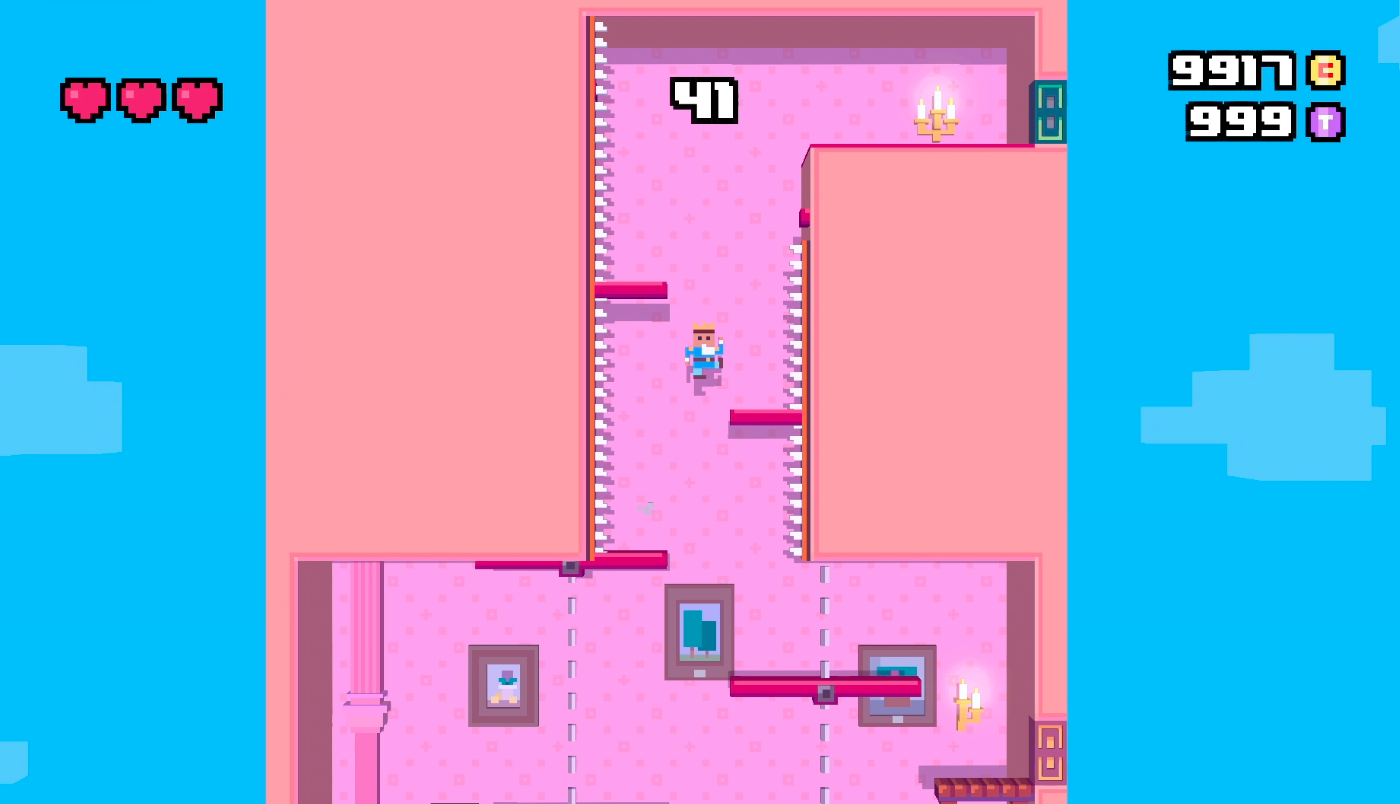 Next, keep playing through the game until you reach a level with two columns of red platforms. They’ll be moving downwards. The yellow door teases you, inviting you to enter, but the way to the green door is upwards. Just keep ascending until you can reach the green door at the upper-right.

This secret level is a foot race. However, your path is significantly more complex. The little blue enemy has pretty much a straight line, while your path zig-zags across the level. There’s not much room for error here, so be as fast as possible. The trick is to get to the gem before the red switch is triggered. If it is, then the gem is unreachable.

Two bouncing sounds warn that the end is near.

Oh no, is he trapped? How does he get out?! Heh, you can easily leave the box, but the gem will be locked inside if you can’t reach it in time. 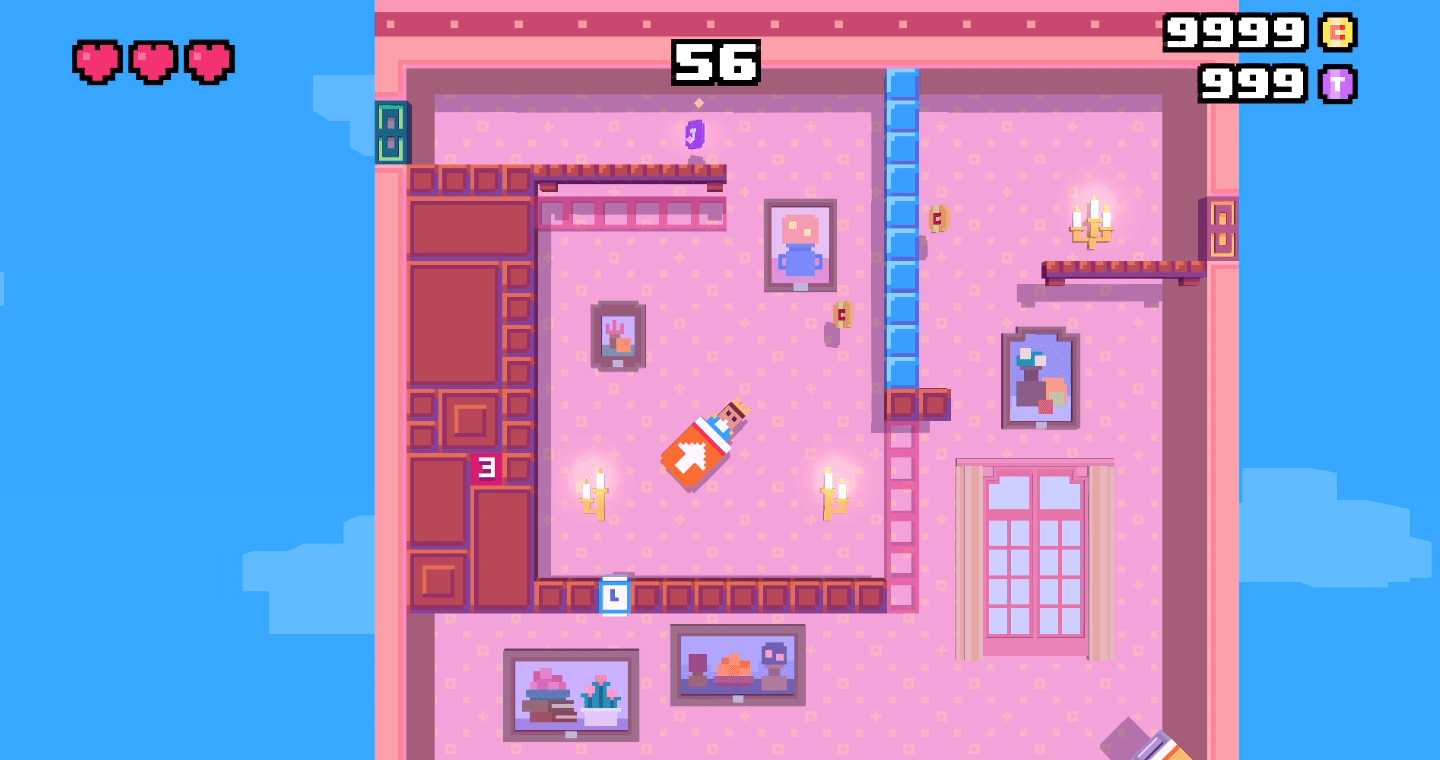 This room leads to a secret level. The trick is to time the bucket blasts with timer blocks. A red wall blocks the route to the green door. This particular randomization of the room is more forgiving. If you mess it up, just use the blue switch to escape and then try again.

Once through the green door, a figure-eight of coins awaits you. A gem floats against the flow of these coins. Use the trampoline platforms to reach the coins and the gem. This is another one of those — don’t fall down — levels. If you’re good with your bouncing, you can have many attempts to catch the gem.

Here’s an alternate route to the figure-eight room. A swarm of birds will chase you. It’s actually a good thing that they do.

Lead them along until you reach a platform with enough height to turn and attack. When the birds are in range, jump off one of them to reach the upper platform. I really like this one. It’s lots of fun. Once at the upper level, just go back to the beginning. Using a bucket, you can blast to the secret green door at the upper-left.

Every 30 levels is another boss fight. The eagle is really aggressive later in the run. That’s a big part of the challenge in getting that last gem. The upper levels have greater difficulty. But unfortunately, that last gem level doesn’t usually appear right away.

That means if you want to unlock the Prince, you’ll likely have to practice defeating the boss. In this particular castle, you might be OK with a skilled team. As long as you don’t have someone that constantly wanders off through the yellow doors, one really talented player could carry the whole team.

That’s if they can get through this challenging level. I’ve seen hopes of a successful gem quest end here. The problem is timing the jump. Red and Blue blocks alternate, but that’s only part of the problem. Another issue is that you can’t simply jump on top of the columns of blocks.

Instead, you’ll have to bounce off the enemies too. The types of enemies can vary. The beginner mistake is to kill the enemies too quickly. Unlike the original, Crossy Road Castle doesn’t force you to move forward. So, you can take your time with this level. The game is fast paced, especially in multiplayer, so you can feel rushed — even when you’re not.

Here, I’m watching the birds, trying to split them up, so I can try again if I miss the jump. When I see a clear path, I make my move. The green door is at the upper-right.

This particular gem level is deceptively difficult. If you bump into a wall, it’s pretty much over. So, it’s important to maintain your speed. While you could take your time previous level, you have to go fast with this level.

The trick is to chase the gem before it gets away. Try to stay somewhat towards the left side, as that’s where the gem is ultimately going. If the gem makes it to the box at the top-left, the gem quest has failed. But in this particular attempt, we were successful in reaching the gem. That’s how you unlock the Prince.