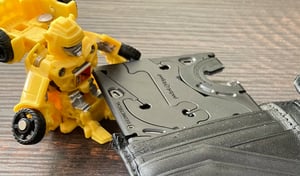 While trying make more videos for the Photics.TV “Relaxing” playlist, I’ve been lugging around a tripod. It’s not been fun. That’s when I remembered about the Pocket Tripod by Geometrical. That’s the topic of a video on Photics.TV. It’s a review of the Pocket Tripod PRO. It’s a credit card sized device that converts into a little stand for your mobile phone.

The overwhelming majority of pictures taken today are taken with mobile phones. It goes back to an old photography saying. The best camera you have is the one you have with you. Well, Geometrical put a modified version of that saying right inside the box.

The Best Tripod Is The One That’s With You.

On the left side of the Universal Kit, a Fit Card is included to measure the size of your phone. This is an important part of using the Pocket Tripod, as it can be tough to decide the right size. 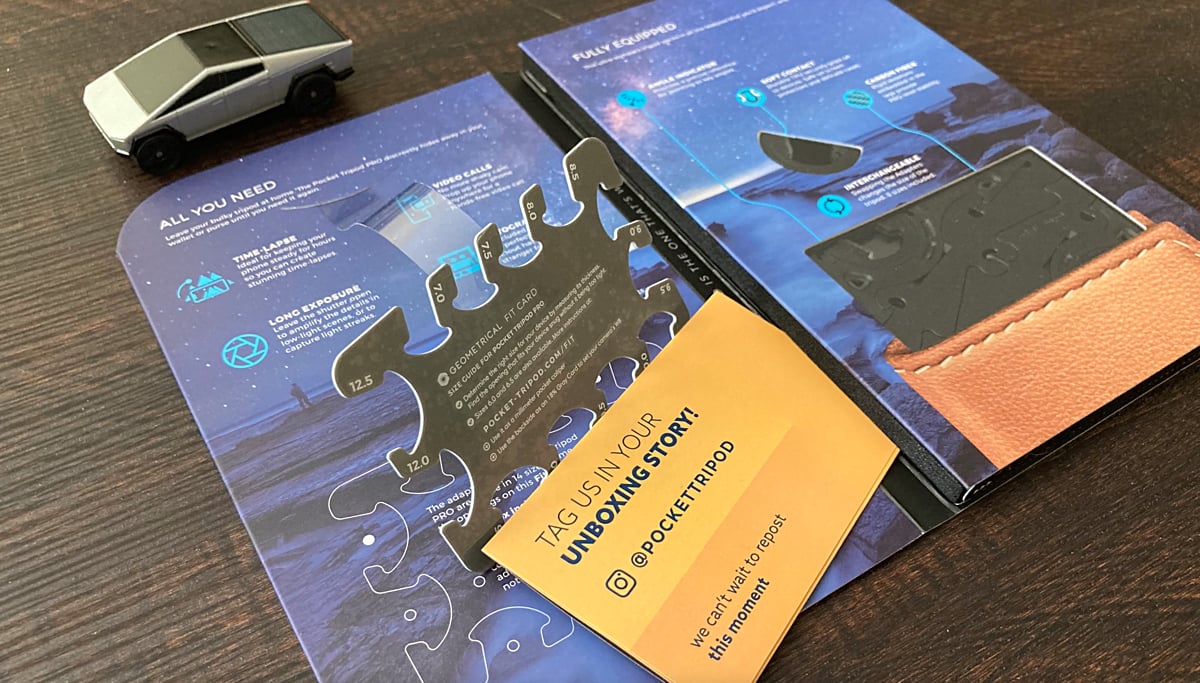 That’s why I prefer the somewhat more expensive Universal Kit verses the “Single Size” option. If the Pocket Tripod is as long lasting as a Wallet Ninja, then I plan to use it a long time. That means I like having the option of changing “Adapter Pairs”, as the Pocket Tripod should outlast my current phone.

The fit does need to be a little snug, especially if you’re creating something like a time-lapse video. Otherwise, a strong breeze could cause your phone to wobble around. But if you’re just taking quick selfies, you might prefer a looser fit, as that would make it easier to get your phone in and out of the tripod.

So, even though you could save $10 by picking an exact size, that might be too limiting in the longrun. You could change phones or even cases. That’s why I think it’s nice to have the extra adapters.

Although, the website says, “If the tripod you buy isn’t the right size for your phone or case, we’ll send you a FREE pair of adapters in the size you need.”

Again, I opted to avoid that hassle and went with the Universal Kit. If you’re giving the Pocket Tripod Pro as a gift, then your recipient very well may enjoy having different size options too.

One more thing about the Fit Card, it was covered in a protective film. I was wondering why it looked so bubbly in the pictures. The instructions on the card say it can be used as a millimeter caliper or a way to set your camera’s white balance.

But the Fit Card is only an entree, the real meal of this review is the Pocket Tripod Pro itself. To get to it, I would have to tear open the box. This is a real shame, as it’s one of the best package designs I’ve ever seen.

Seriously, I didn’t open it right away as I was so impressed with the box. It sat on my desk for a couple of days. But eventually, I tore it open. 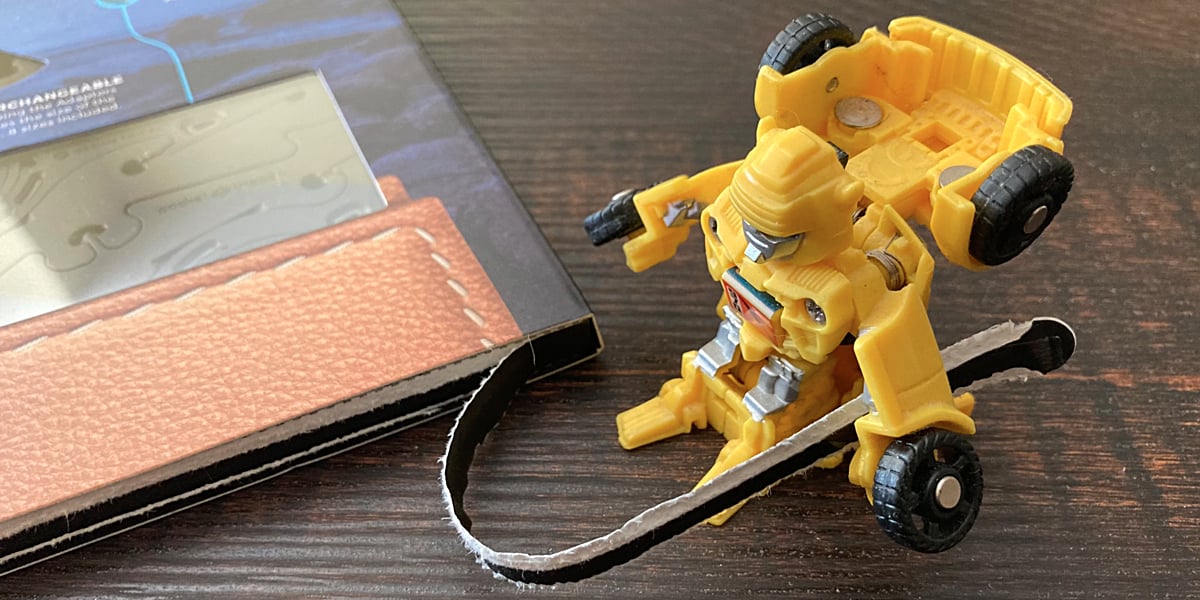 There are two tabs to rip sideways, revealing the third part of the trifold. Once inside, there’s a warning to greet you. It says, “Never bend the two halves. This will damage the center hinge.” 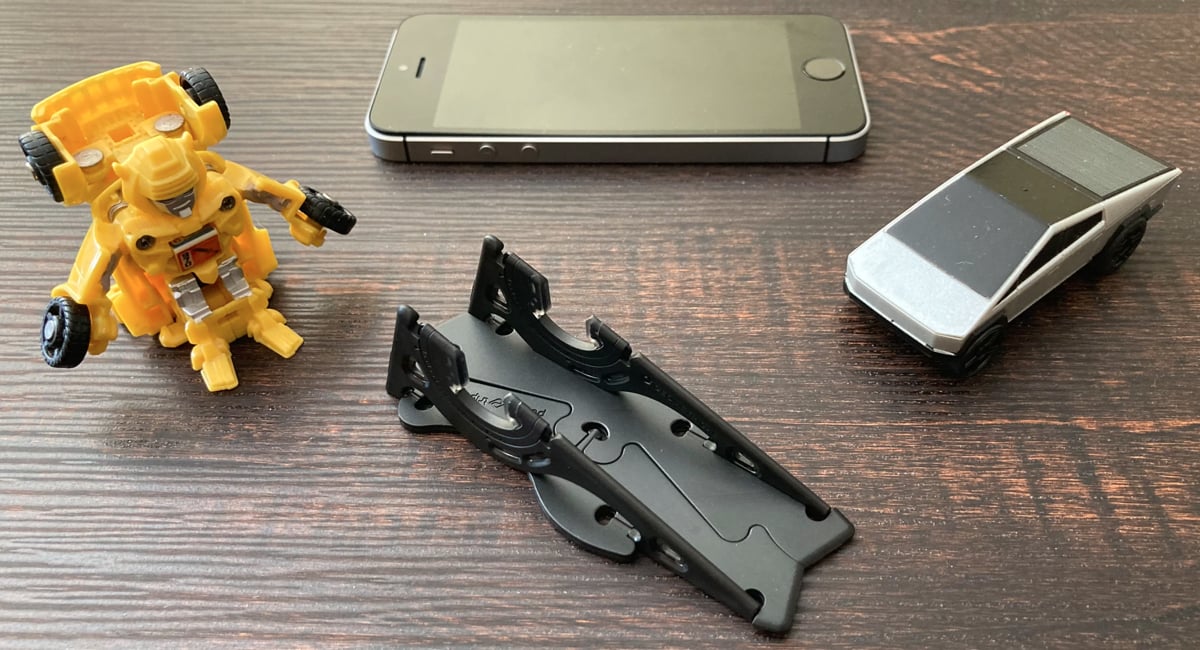 While the name “Pocket Tripod” suggests that it’s primarily a tool for photography, it could be useful for watching movies or playing video games while on the go. However, the Pocket Tripod is meant to work with mobile phone, not tablets. I tried using it with my iPad and it kinda worked but it was a little too wobbly. I’m going to leave that job to my Anker.

But to truly test out the Pocket Tripod, I took it to the beach. The objective was to create a time-lapse video, which is really difficult to do without a tripod. I was successful, creating a short video of rolling clouds. However, the video pointed out a huge huge limitation of the Pocket Tripod. The horizon line was crooked! The Pocket Tripod can only be adjusted in one direction. This is not an insurmountable problem though. The horizon line can be straightened in editing.

This goes back to the slogan for the device. The best tripod is the one that’s with you. Tripods are big, kinda heavy, and lots of people might look at you weird when you carry them around. While a traditional tripod may yield better photographic results, that doesn’t help me if it’s back at home. With the Pocket Tripod, it’s small, lightweight, and discrete. Since it now has permanent residency in my wallet, that creates more opportunities to create better photographs and videos.

As an example, years ago I bought a copy of the Slow Shutter Cam app. I was amazed at what it could do with the iPhone camera, especially in low-light environments. These were photographic techniques that were usually reserved for pro cameras. However, I haven’t used the app much since. That’s because, to truly get the most out of the app, a tripod is necessary. I usually didn’t have one with me — but now I do. So, I’m excited to see what photos and videos I can make in the future.

So, in conclusion, I like the Pocket Tripod Pro. It’s a great idea and it works as expected. Obviously it’s not the best tripod in the world, but it’s certainly my most portable tripod. And when it comes to taking spontaneous pictures, availability is what matters most.