As an achiever, there’s a common theme for me. What do I do when I reach my goal? I was filled with such excitement as I was closing in on the Legendary Survivor title. Yet, that feeling of euphoria was shattered when I achieved the goal. I didn’t know what to do next. I was lost and unmotivated

So, I started drinking

In real life, I don’t drink alcohol. Yet, I don’t have an objection to TANK drinking. He’s not operating any heavy machinery, so it’s probably OK. Guild Wars is something of a medieval game, so the Dwarven ale might be safer than the available drinking water.

If you start to do some math, you can figure out what happened next.

That’s when I started to realize I could go back to the Punchout quest, enjoy the good loot, but go after multiple titles — including the Drunkard title. 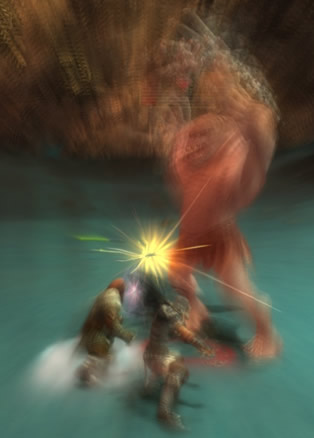 Apparently, TANK is an angry drunk!

I was having fun again. It was a great experience, almost like a whole new game. Five years ago, when I started playing Guild Wars, the words “drunken boxing” didn’t seem like a possibility. When Jeff Strain, Mike O’Brien and Patrick Wyatt formed Triforge in the year 2000, did they watch Jackie Chan’s Legend of the Drunken Master?

Pat: Whoa dude, cool movie.
Mike: Yeah dude, that like rocked.
Jeff: We should put that in our game
Pat: No way dude, no one would believe it. We’d break continuity.
Jeff: Yah, you’re using big words, so it must be true.
Pat: Shut up or you’ll face my fists! WAAAHHHHH!!

ArenaNet has a habit of putting pop culture into their game. The developers are not afraid to get a little silly. That’s how Kilroy got started. It’s a spoof on Leeroy Jenkins. Meanwhile, virtual alcohol is common in MMORPGs. The drunken effect in Guild Wars is incredibly vivid. (Although, I don’t know if it is an accurate depiction of being inebriated.) As a creative gamer, I decided to mix the two — drunken boxing.

It was fun for a while, but the screen started to make me dizzy. There was also a larger problem… I ran out of beer!