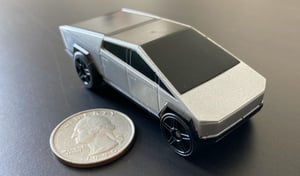 Back in the winter of 2020, just before the pandemic mania hit the states, two Hot Wheels remote control Tesla Cybertrucks were announced. The preorders for the 1:10 and 1:64 scale toys ended almost immediately. That marked the start of a long wait until the Christmas season. But after a year filled with tragedy and turmoil, the release was delayed. With just a few more months of waiting, a playful version of the Tesla Cybertruck arrived at my door.

This wasn’t about trying to scalp the product on eBay. Although, around Black Friday of last year, I did see the 1:64 model listed as high as $75. Instead of practicing in price gouging, I was actually looking for a cat toy. Back in 2016, I tried to back the “Mousy” project on Kickstarter. It failed. “The World’s Smallest Bluetooth Interactive Cat Toy” only raised $5,039 instead of the intended $10,000 goal. Apparently, there was a different campaign called “Mousr” and that one was successful. I didn’t see that one until it was too late. The Petronics website currently states that “Mousr” is no longer available. Having missed out on the fun, I’ve been looking for a replacement. 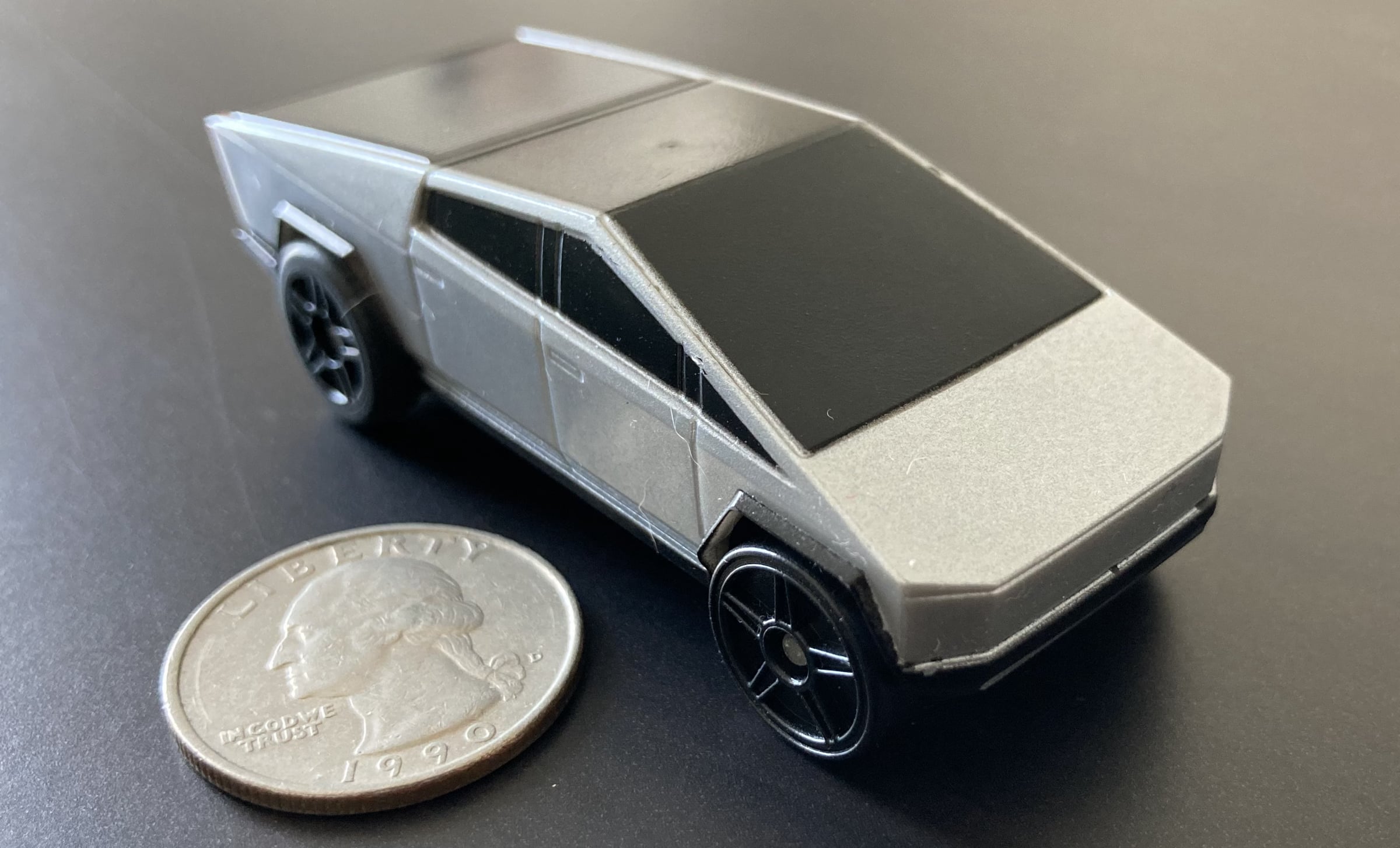 The 1:64 scale Cybertruck is surprisingly small. It was even smaller than I expected. Considering that the toy is mouse sized, it seemed like a good alternative. Just look closely at the picture. You can see strands of dust. At this size, the Cybertruck looks cute. But before going crazy with the pets, I figured that it needed to be fully charged up first. 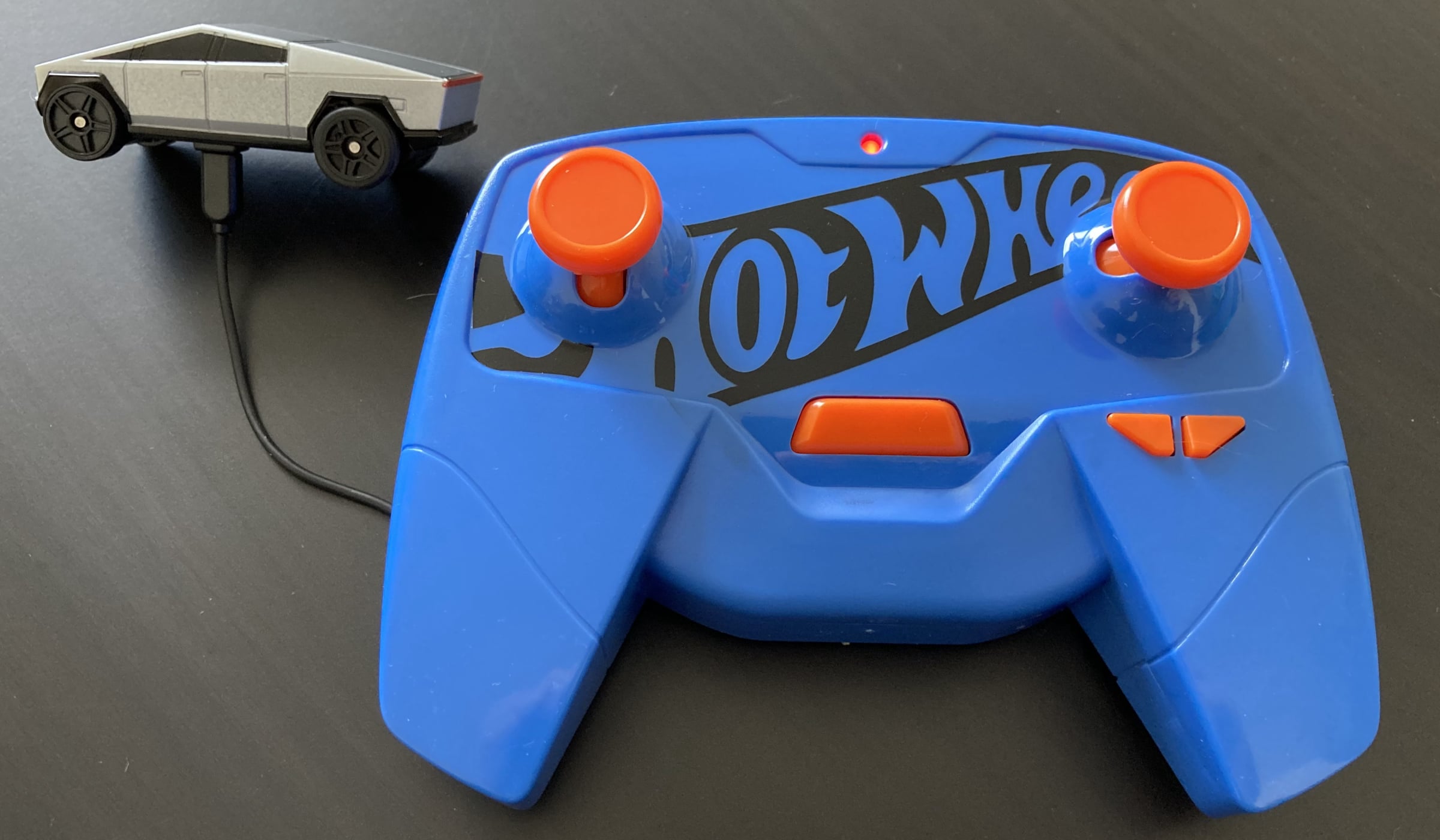 The toy powers up by connecting to the controller. This device looks massive next to the tiny truck. I wasn’t expecting the controls to be blue either. The picture on the product page was black. But regardless of the looks, it was surprisingly functional. Typically, RC toys like this have two speeds — off and high. But with the Cybertruck controller, the forward/back stick works like a throttle. You can move the car slowly or fast. The controller even has a boost button at the top-right. Pressing it gives the Cybertruck extra speed.

The included instructions were a bit ridiculous. I’d have to go to the United Nations to find more languages in a single spot. Learning how to play with this toy wasn’t really hard to figure out. The big orange button in the middle is for pairing the Cybertruck to the controller. If the red light is solid, it’s ready to go. And wow, that car really goes! The speed is good… too good! The Cybertruck can move way faster than I can control it. The Cybertruck tends to slide on my hardwood floors.

Hot Wheels are known for zipping along orange race tracks. With the Cybertruck allowed to freely roam, the results can be quite erratic. Occasionally the toy truck would bump into a wall or flip over, but there didn’t seem to be any permanent damage from those minor hits. After testing out the tiny Tesla, I figured that the cats would hunt it.

Instead, they ran away. 🙀

That was disappointing, as now I have two Cybertrucks. It was $20 for one, but there was free shipping when purchasing two. I’m not sure what I’m going to do with the other one. It’s still in the box. The Hot Wheels Cybertruck could make a great gift. Even more disappointing was realizing that I could have gotten it sooner at Target. What was the point of the preorder?

But overall, it was fun experience. Seeing the miniaturized Tesla zoom around helped me to imagine what the real thing must be like. Even though the Cybertruck is not a conventional looking truck, it seems quite practical.

One thought on “Finally Got A Tesla — Hot Wheels Cybertruck Review”