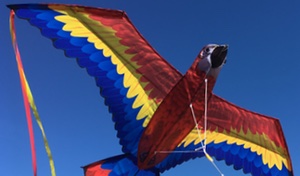 The northern hemisphere is entering Spring. That means warmer weather and more outdoor activities. As a technologist, it’s important to make an effort to go outside. Otherwise, I could spend the entire season at my desk. That’s not very healthy and it also leads to burnout. So, while wandering the aisles of Costco, I spotted something entertaining. There were boxes filled with colorful kites. A total impulse buy lead to two wonderful weekends. Instead of slaving away at the keyboard, I was at the beach. A refreshing breeze lifted my kite and my spirit.

With drones dominating the skies these days, what’s with the nostalgia? I hadn’t flown a kite in decades. Why not use something more modern? Much to my surprise, I enjoyed flying a kite a lot more than my drones. Here’s why…

I wasn’t expecting to find a $14 item in Costco. They have cake that’s more expensive than that. Sure, Costco is a place to save money, but that’s usually because the items are being bought in bulk. Over three years earlier, I picked up a cheap drone in Costco. It was $40-$50. It was pretty basic too, lacking the features of more expensive drones. A good outdoor drone can quickly hit $1000 or more. Kites can also be quite expensive, but there’s a difference. When my AR.Drone hit the dirt, I was out $300. When my kite hit the ground, I laughed and tossed it back up into the sky again. With a kite, there was less worry about expensive damage. That’s because it was so cheap.

Unless you’re flying a giant squid, pirate ship or some other wacky design, kites are usually a beautiful site to behold. They’re bright, colorful and usually equipped with streaming tails. When I went to the park to fly my kite, it wasn’t with the goal of drawing attention. Yet, that’s what happened. People were looking. People had their cell phones out. It was as if they were saying, “Look at that crazy guy with the cool kite.” That’s because a kite is big and easy to spot. People can trace the line back to see who’s holding the kite. It’s less ominous.

With drones, they have a loud buzzing noise. It rattles with an annoying insect sound. Also, they’re usually equipped with cameras, so they’re often associated with voyeurism and spying.

It varies depending on the drone, but it’s usually 20 minutes of fun and then it’s back to recharge. (That’s what happened to my AR.Drone. It was down to 10% of power, but it quickly dropped to zero. After that, the aircraft dropped like a stone.) It’s not something I can keep in the trunk of my car for a spontaneous outing. The battery needs a bit more attention then that.

With a kite, you do need a strong and consistent wind. It varies depending on the kite, but approximately 10-15 mph (16-24 kph) winds work well. Too little wind, the kite can’t fly. Too much wind, it starts getting dangerous. But once up there, it’s as if the kite wants to fly forever. Wind speeds increase with altitude. Usually the big challenge is getting the kite airborne. Once up there, the hobby is quite relaxing. I don’t have to monitor a blinking battery icon. I don’t have to worry about signal strength. I just have to make sure that last bit of string is firmly tied to the spool.

n that first Costco kite outing, I lost track of time. I’m still not sure if I was out there for two hours or three. It certainly was a long time, as I had an uneven tan on my face. The sun was shining on my right side. A line from my sunglasses was apparent.

I had so much fun that I returned the following weekend with a new kite.

This one flew even better. It looked amazing too, like a fiery parrot. I learned a couple of important tips. (I couldn’t find the main instructions with the first kite.) The kite has two loops to connect the main line. The top loop is for light winds, while the bottom loop is for stronger winds. Also, the instructions suggested tying the two streamers together for stability. (My first kite kept turning counter-clockwise, and then slamming into the dirt.)

Drones do have advantages!

The point of this article is not to bash on drones. There are distinct advantages to a drone.

The point of the article is to point out a trend that I’m seeing with my profession – technology isn’t everything. Sometimes the latest tech is not necessarily the best tech. For a simple and relaxing weekend hobby, a kite was cheaper and more fun than a drone. The phrase “go fly a kite” is often uttered as an insult. Thanks to a serendipitous discovery in Costco, my perspective has changed. Kites are cool!