I’m starting to think that the Survivor title is the hardest one in Guild Wars. It demands absolute perfection for 100 levels of gameplay. Where does that number come from? After running Kilroy’s mission mulitple times, my mind started to wander. I started to think about a lot of things. Focusing on the end goal started to consume my thoughts. Just how much experience is needed to reach this title?

The Punch-Out run was calculated down to a science. I knew which buttons to press, I learned how many points I would collect and I became familiar with experience boosting scrolls. Eventually, I had a lot of extra skill points. After level 20, the experience bar keeps going. It’s like I’m still leveling. How many times would I need to fill the bar to complete the survivor title? The math is actually pretty easy…

The numbers are not exact. I kept the math simple.

When you add the original 20 levels, that’s 99.8 or approximately 100 levels. It seemed like a reasonable number until I compared it to other things. Imagine taking a Math test where you failed if you got one question wrong. Imagine other online roleplaying games. Level 50 is typically the pre-expansion pack cap for these types of games. It can take months to max out a character. The Survivor title track brings Guild Wars into the same type of level grinding gamplay. If not for the speed of the Kilroy quest, which is repeatable, I would be progressing at a much slower pace.

When I think about how long it would normally take to gain a Guild Wars level, I realize how difficult the survivor title can be. It took me about 5-6 hours of gameplay to play through the maps before Lion’s Arch. Absolute perfection was demanded for all of that time… and it took multiple tries to meet that level of perfection. 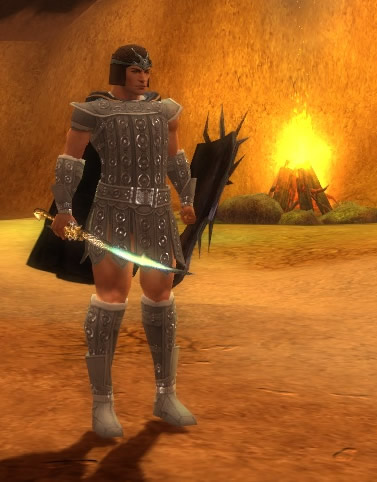 Here’s TANK at the Ruins of Surmia… again!

There were some near misses with the latest version of TANK. I almost got killed by angry dwarves again. I couldn’t understand how the dwarves were doing so much damage. That’s when I learned not to use Frenzy when hit with Empathy.

Just in general, I recommend against using high risk skills while going for the Survivor title. I dropped Healing Signet and Frenzy from TANK’s skill bar. I also stopped trying to color in every part the map as I progressed. I can worry about Cartography later. Right now, my mind is on math.

At approximately 590,000 experience points so far, I’m about halfway toward my goal. I figure that three hours a night — for the next four days — will complete the title. The math is easy, but that’s a long time to go without making a mistake.