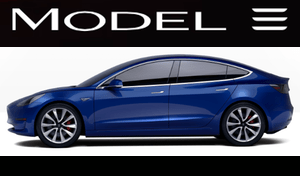 After some fairly harsh words about pre-ordering Tesla’s Model 3, I’m surprised to have had such a change of heart. After carefully researching the alternatives, the Model 3 is not perfect — but it’s a lot better than the competition. At some point in the near future, I will need a new car. I feel that it should be an electric car. Tesla is clearly the leader in that market. I now find myself in a really long line, a line with several hundreds of thousands of people ahead of me. The car is not even expected to start shipping until late 2017. It’s going to be a long wait.

So what changed? The big problem with electric cars is the range. I like the Ford Focus Electric, but even the improved range is only 100 miles. I also don’t get the feeling that Ford has been serious enough about electric vehicles. Otherwise, they’d have an electric Mustang, with faster 0-60 times than “Ludicrous Mode” in the Model S. An electric Mustang, that’s the car I was really looking for. Unfortunately, it doesn’t exist. At least, not direct from Ford. Realizing that my ideal scenario wasn’t possible, I had to find the next best thing.

Also, I don’t like going to car dealers. I like the idea that I can buy a car directly from Tesla. The hassle of a middleman is eliminated. That was one of my concerns with the Chevy Bolt. On paper, it looks to be the superior car. It’s similar in price and range – but the Bolt is available one year earlier. Yet, I’d have to go find a Chevy dealer. I really didn’t want to have to explain why I wanted an electric car instead of something else. Also, I’d have to speak clearly. “No, not Volt… the Bolt!”

The sad reality is that I think the Bolt and the Volt are not attractive cars. While the front bumper on the Model 3 still seems odd to me, the overall look is much more appealing to me. It’s like a car that James Bond would drive.

I’m still apprehensive about the dashboard of the Model 3, but Elon Musk says the real steering controls and system for the 3 feels like a spaceship. Additionally, the car will likely be upgradable with cool gadgets. While the full options are not finalized, there’s significant speculation about dual motor (AWD), autopilot, bio-defense mode and a heads-up display. That’s a car for the 21st century. That’s a car for me.

Also, I’m looking at the possibility of a significantly longer commute. If I’m going to be spending more time in a car, then it should be a nice car. With the higher mileage, an electric car makes sense. The Tesla Model 3 has the range required, while bringing the overall costs down. Electric cars are cheaper because of lower maintenance and lower fuel costs.

It is annoying that I’ll probably miss out on the full $7,500 tax credit, but it’s still cheaper than a Model S.

I think the best part is that I’m part of the revolution now. While I’m not a proponent of climate change, it is nice to get away from gasoline. Today’s highways are stinky places. I like the idea that a car can be more energy efficient, while being fun to drive and looking cool. A better future is on the way. I just have to stay patient.