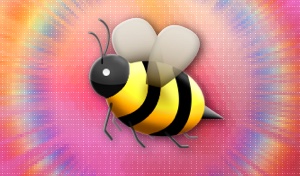 Hydroponics is a great project for me, as I don’t like dirt or bugs. There’s a problem with that mindset though. Pollination is needed to make the tomato fruits grow. That usually involves bees fluttering their little wings around the flowers. A strong wind could also shake the whole plant. But with an indoors AeroGarden setup, neither action was occurring. To ensure that my tomato plants would produce lots of tasty fruits, a bit of technology was used.

This is essentially plant sex. Male and female parts grow from the plant. They require stimulation for pollination. The tomato plant is not self-pollinating. It needs help to grow. I felt a bit silly just blowing air at the flowers. Fortunately, AeroGarden provides a solution to this problem. It’s called “Be the Bee Pollinator”. It’s similar to a toothbrush – but it’s adorable!

Again, this seems silly. Do I really want to wave my magical wand on these plants, like I’m some sort of tomato fairy? Yet, I could see the struggle. The plants were just sitting there. The flowers would bloom and then droop. Before buying the gadget from AeroGarden, I used my own electric toothbrush. After wrapping the head of the brush in a paper towel, I used it to gently shake the flowers. Bzz… the pollen sprinkled out like snow. That’s when I knew the “Be the Bee” had value.

I wanted to create a video of how the pollinator works, but I ended up getting distracted with iMovie on iPad.

Previously, I felt that this project was kinda boring. But lately, it’s been a lot of fun. Since the tomatoes require pollination, there’s a bit more for me to do. Farming is a lot of work, but just sitting around and waiting is dull. Creating the video was hysterical. This also makes me wonder if the iPad could be a desktop / laptop replacement… but that’s a story for another article.

One thought on “The Hydroponics Experiment (Part 9 – The Pollination)”