War Pinball is a game that I ignored for a while. I used to play 3D Pinball – Space Cadet on Microsoft Windows, but I didn’t have an equivalent game on Mac or iOS. I knew about Gameprom’s War Pinball, but it didn’t interest me. With all the bad press surrounding Charlie Sheen, I wasn’t in the mood to play a game based on Platoon or Navy Seals. But since Chuck Norris also has his own table in this app, I decided to give it a try.

Currently, War Pinball is the iOS game that I play the most. I downloaded the app last September. Unlike most apps, where I get bored with them after a few days, I still play War Pinball. That’s great value for a $1.99 app. The game has a good feel to it. The physics seems to believable, the table design is solid and the overall presentation is excellent. With three different tables, based on films from the 80’s and 90’s, there is tremendous replay value.

Missing in Action – At first, this was the table I played the most. It’s the easiest of the three tables, as the ball cannot be lost by falling down the side ramps. Also, Chuck Norris is still a popular guy. Like all of the War Pinball games, weapons fire and explosions can be heard when hitting the flashing targets. Audio clips from the movies are also played. That’s a good and a bad thing. While it’s fun to feel all macho while playing the game, some of the sounds are extremely repetitive. “What are the coordinates on LZ-Sally? 3740-301-niner.” That’s just too long for such an easy to hit target.

By playing MIA first, I learned about the mechanics of the game. With most pinball games that I’ve tried, it’s not so fussy about the order. But with War Pinball, there are randomized targets to hit. If those targets aren’t hit when lit, then the score suffers. It’s annoying to hit a ramp and pretty much no points are awarded.

Navy Seals – Once I figured out what was going on with the lit arrows, Navy Seals was a more enjoyable table. But despite numerous attempts, I still haven’t completed the story mode for this table. It’s quite challenging. Perhaps that’s one of the reasons why I keep playing the game so much. Although, there is one obvious flaw in the game’s difficulty. 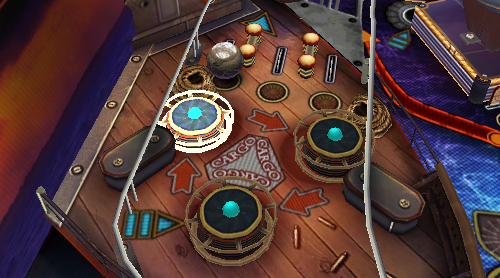 By hitting the left ramp, and then the boat bumpers, it’s really easy to get points. With the story mode so difficult to complete, and the boat bumpers being so lucrative, my main goal becomes to hit the left ramp many times in a row. The bumpers have little lights in the middle. It starts out with dark blue. But by activating the three lights associated with the upper lanes, the bumpers increase in value. The bumpers advances to light blue, green, orange and then red. Sometimes the ball just keeps bouncing on those red bumpers for many seconds — adding millions of points to the score. (This also applies to MIA, as those boat bumpers are also great for points. That’s a much harder shot though.)