When I read that Apple would not be unveiling their new Apple TV during the WWDC Keynote, I was disappointed. Why is Apple leaving money on the table? If the iPhone and iPad are making billions of dollars in Apps, it seems like a no-brainer to release a developers kit for the Apple TV. The news from today’s keynote felt a bit underwhelming. But tonight, I spotted something interesting. What’s this Apple? You’re looking for RSS feeds? I thought that web technology was near death. Apparently, the new Apple News App is like a defibrillator for this classic web tech – and perhaps a jumpstart for the news industry in general.

I was skimming through the news sites when I spotted something interesting. What’s this? I don’t need two separate accounts for Apple development? Only one account is needed for iOS, OS X and Apple Watch? That seems nice. I hadn’t renewed my account in a while. I had been thinking about it, but none of my projects seemed exiting enough. It’s ultra-competitive on the App stores. What’s going to set my projects apart from the thousands of other developers?

Being first is a nice edge, which is why I’ve been watching out for the Apple TV upgrade. That little black box can easily be transformed into a game console. But with nothing new, I went scrounging around for additional information. You can see my frustration on the Tumult Hype forums… Is there a Physics API? …it’s as if the past few years have been nothing but technological walls. GameSalad, Stencyl and now Hype… why is it so hard to make a good game?

But this evening, the stress lifted as I discovered a new power in iCloud… 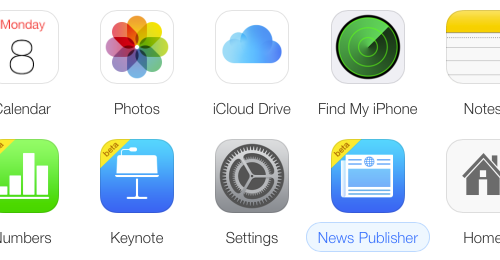 It’s easy to get started with News. Anyone from major news organizations to magazines, blogs, and more can sign up to deliver their content to News. Register to submit your RSS feeds to News.

Apparently, Apple has something bigger planned, but it’s just in the beta stages right now. I’ve been burned by Apple experiments before. Their iBooks Author app was a disappointment for The Interactive Stencyl Textbook. Do I really want to get locked into an Apple only platform again?

Although, I have been thinking about the newspaper biz again. My degree is in photojournalism. And aside from Pokemon Snap, I haven’t found much use for my degree. Maybe Photics was launched too soon on the Internet. Maybe the timing is better now for a new publication project. Honestly, I am burned out on video games. Perhaps Apple’s push into the news biz might improve the industry. It might be a new beginning for my business.

What do you think? Are you more interested in something more newsy or perhaps you’re waiting for more games?