Avid readers of this website know, I like the Mac Mini. Naturally, I was happy when Apple finally updated there iconic computer. It was a long wait. It was over 2000 days since the launch of the 2012 Mac Mini. (The 2014 Mac Mini was a step backwards and my 2009 Mac Mini was still good.) That’s a really long time, especially for technology. Was it worth the wait? Now that I actually have my own 2018 Mac Mini, I can answer that question.

Firstly, the most noticeable problem with the Mac Mini is the price. The 2014 base Mac Mini was $499. Now, it’s $799. That’s a dramatic increase. It had me wondering if this was the moment I should finally switch to Linux. But as mentioned in the lead paragraph, the 2014 model was a step backwards. For a true comparison, the 2012 model is the one to look at.

The base 2012 model was $599. Even with an inflation adjusted price of $660, that’s still cheaper than today’s base Mac Mini. There’s another major problem with the 2018 base model. It only has 128 GB of storage space. That’s very tiny by today’s standards. To make the matter worse, the solid-state drive (SSD) is permanently attached to the motherboard. The Apple website states, “Mac mini storage is not user accessible. If you think you may need more storage capacity in the future, consider upgrading at the time of purchase.”

That’s why I didn’t go with the base model.

It’s not a total Apples-to-Apples comparison, as the specs are somewhat different between the two models, but I think this is what a lot of Mac Mini reviewers miss. While the i3 model is way more expensive than the previous base model, the i5 model is inline with the previous “OS X Server” models.

Both 2018 models are expensive. But are they really?! I looked at alternatives. For comparison, a similarly specced HP EliteDesk 800 G4 Desktop Mini PC (without Windows) is $1276.00.

So, the Mac Mini wins, right?! Well, not exactly. The HP is on sale today for $803.88. That is a much bigger percentage savings than I saw for the Mac Mini. 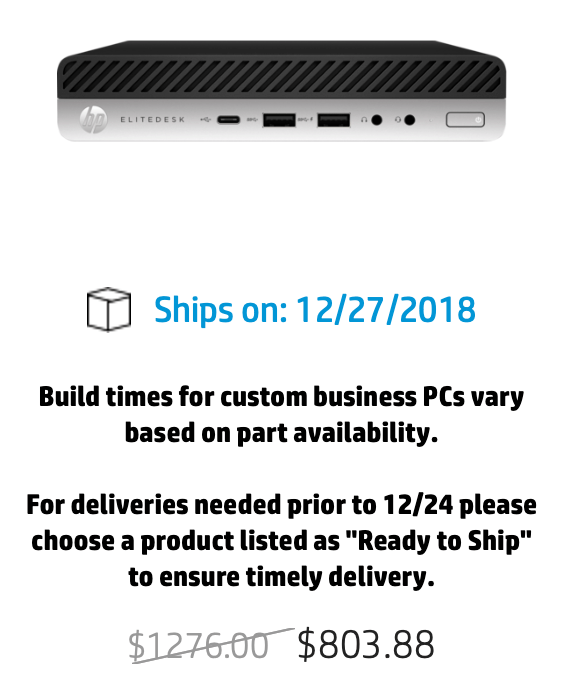 In Mac circles, the higher price is known as the “Apple Tax”. This is nothing new. Macs are not known as cheap computers. They’re premium computers. That is why I consider the i5 Mac Mini to be reasonably priced. That’s especially true considering that the new Mac Mini is “Space Gray”. That’s an expensive color for a Mac. One only needs to wander over to the Apple “Accessories” shop to validate that fact. The Magic Trackpad 2 – in “Silver” – is $129.00. In “Space Gray” it’s $149.

The “Space Gray” color on Mac typically means pro. The 2018 Mac Mini is fast, with a decent array of ports, so it feels pro – even if it doesn’t have the “Pro” name. I’m not thrilled about the price of the new Mac Mini. It is expensive! (Hopefully it lasts at least as long as my previous Mac Mini.) But looking at the alternatives, they just wouldn’t work for me. I prefer macOS. I also prefer a desktop, with a mouse and full-sized keyboard. I also don’t like all-in-one computers, which means no iMac – but perhaps that’s story for another day.