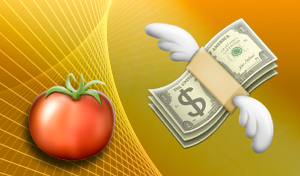 Most hobbies are expensive. And right now, my adventure into farming is still at the hobby level. After growing a few boxes of tomatoes, and a lot of soggy lettuce, I was wondering if I should just give up on the AeroGarden. One consistent finding in the “Hydroponics Experiment” is that it’s simply cheaper to buy veggies at Costco or the local grocery store. I like the idea of growing my own food. But if this is going to work, I really have to cut costs.

When I was wondering if I should continue with this project, I was looking at an Amazon listing for AeroGarden Sponges (50-Pack). I didn’t need the complete kit, as I saved the “Grow Domes” and “Grow Baskets” from the kits that were include with my AeroGarden. I figured I didn’t need the “Pod Labels” either, as I know what I’m growing and a simple piece of tinfoil could be used to block out light.

So there I was, staring at the webpage. I was wondering if it was really worth ~$9 for these sponges. I hesitated, and then I returned to the page at a later date. I was too late, as the sponges doubled in price. At the time this article was written, 50 AeroGarden Sponges are $17 at Amazon.

“The Tractor” displays the fluctuation in pricing. The graph wasn’t totally up-to-date, as it didn’t show the recent price increase, but it showed an extreme range in pricing – as low as $8.40 and as high as $22.91. What am I trying to buy here?! I expect the stock market to behave this way, but this seems crazy for the AeroGarden.

Hobbies help relax the brain, so I decided I might as well use my AeroGarden. I didn’t buy the pack of 50 Sponges though. Instead, I got a Red Heirloom Cherry Tomato kit for a 9-Pod AeroGarden. I only have a 7-Pod system, but this is another AeroGarden oddity. The kit for the 7-Pod system (about $18) only contains three baskets, while the 9-Pod system (about $20) contains four baskets. So, I got the larger kit as the cost per pod was significantly cheaper. I only put two tomato pods into the system and I saved the other two for another round of tomatoes. I figure that the extra space should help the tomatoes grow better.

Meanwhile, I’ve been thinking about “Grow Grips“. It was about $7.50 for 25 Grow Grips – but they’re reusable. I took a chance and added it to the order. Perhaps I could use Grow Grips as an alternative to the AeroGarden Sponges. Sure enough, a Grow Grip fit almost perfectly into an AeroGarden Grow Basket. I had a plan that might save money. Each AeroGarden Pod was filled with multiple seeds. Instead of chopping the tops off, leaving only one plant, I tried to transplant them into the grow grips. Would this new method work?

No, they died, almost immediately.

When I woke up the next morning, all but one of the transplanted tomato plants were dead. The only one that was still alive was the one with the longest roots. Soon after, even that longer plant died.

The AeroGarden Sponges suck up water. The 1” Grow Grips are much shorter. And while they squish like a sponge, they seem to be fairly hydrophobic. The drip system of the AeroGarden didn’t seem to be giving the Grow Grip plants enough water – especially while the system was in germination mode.

I’m not sure, but perhaps if the roots were longer and the system was cycling water more frequently, maybe the plants would have lived. Maybe the water level should have been higher too. Right now, there’s not much more I can do. The main two tomato plants appear to be healthy and they’re growing. That means my AeroGarden system will be busy for the next few months. Once an AeroGarden gets going, there’s not much to do but wait.