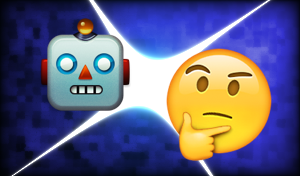 If you haven’t noticed already, I’ve been working on a new game. It’s called Circles with Grandma. It’s a game from my childhood, which I’m modernizing for today’s generations. It’s a nice family-friendly game, which is great for the holidays. It’s almost finished too. There’s only one major task to complete – add artificial intelligence. Four decades ago, I played this game with a pencil (or pen) and a piece of paper. It was meant to be played with two people. Today, the computer can take over when not enough people are around.

The task of adding artificial intelligence is challenging mentally. Not only because it involves logic, JavaScript programming and game design, but because it’s been causing deep philosophical thought. What is thinking? What is life? What does it mean to be self-aware?

We marveled at our own magnificence as we gave birth to AI.

Actually, while adding AI to my game, I felt great apprehension. It really emphasized the challenges humanity will face in the next few decades.

During most of the development, the computer controlled player (or players) operated randomly. It just selected a circle from the list of remaining moves. But with AI as the only task left, a task I kept delaying, I really had to think about what it truly means to play the game. I had to teach the computer the meaning of risk.

Those numbers are the mathematical representation of human emotions and desires. Each “circle” is given a score. The lower the number, the safer the circle. If the number is negative, that could represent greed or hunger. That’s what the computer needs in order to score points. Higher numbers represent the level of risk. Those circles are less safe. They represent moves that would likely help the opponent.

It was disturbing to see a kids game represented this way. Back in the day, it was just a simple little distraction. I’d color in circles and play. I didn’t give it much thought, other than winning the game of course. But now, after working on this game, I’ve been wondering about deep topics, such religion, evolution and the future of work in an automated society.

We are endowed by our creator with certain unalienable rights.

Will computers or robots ever have a soul, like Johnny 5 in the movie Short Circuit? I don’t know the answers those questions, but it’s pretty obvious that there’s an epic battle of good and evil over the horizon. Technology could be a tool to enlighten and uplift humanity or it could be a disaster.

Evolution – As I’m programming this stuff, the slightest mistake breaks the program entirely. To think of all the things that are needed to create life, and how the slightest variance can lead to death, I suspect that there’s more to existence than just randomness. There’s just so much going on. Even to play a simple game, the computer is doing thousands of calculations. How does a bird know how to build a nest, using nothing more than it’s face as a tool? Meanwhile, babies need to be about 1-2 years old before they can stop soiling themselves. How many computations are going on in my brain that I don’t really think about – breathing, listening to background noise, temperature control – wow my office is cold this time of year.

The Future of Work – How does artificial intelligence fit into God’s plan for humanity? Humans are not perfect. Does that mean we should be wiped out? Fortunately, the bible speaks of eternal salvation and forgiveness. Lately, it’s too trendy to bash Christianity or religion in general. Yet, now is especially when we need it the most. That higher calling to be good and do good – that’s critical as we decide how AI fits into society. Humans are special. YOU are special! There’s something unique about us. But what will be the purpose in life when robots can do every job better than a person?

These deep questions are tough to answer.

One thing I’m fairly certain of is that technology should help humanity – not replace it. The game shows that. Sure, you can play against the computer, but the game is ultimately meant to be played with people.