Donald John Trump is now officially the 45th president of the United States of America. That’s a huge change in direction for the country. What does that mean for the lives of ordinary citizens? Well, if Whitehouse.gov is a bellwether, nothing too radical so far. The Trump administration was given the keys to the official website of the Whitehouse. While there was a significant change in content, it’s still running on the same old content management system (CMS) – Drupal 7.

After the near two-billion dollar boondoggle in building healthcare.gov, (Wikipedia) it might not be such a bad idea to reuse existing technology. Running a Drupal website can be expensive. By perusing jobs.drupal.org, one can see that Drupal web developers are well paid. Salaries routinely hit $100,000 a year – plus benefits.

Considering that Trump won an election with help from a massive following on Twitter, it would seem that leveraging one of the most important websites in the world would be part of a global strategy. With the battle cry of “Fake News”, what better way to spread the message than delivering it direct from the source?

That’s not what we’re seeing on the first few days of the Trump administration. This is a missed opportunity. Here’s an example…

At the time of this writing, the “Press Briefings” page had zero listings. ZERO! That’s a problem. This is a perfect space to combat a hostile press. If the mainstream media is falsely representing the turnout of the inauguration, let the world see the proof. Where are the Whitehouse photos? It would be trivial to post up some pictures to silence naysayers. Instead of hosting a strangely awkward press briefing, the new White House press secretary Sean Spicer should be rocking that website.

That’s the trouble with Drupal. It’s not always so straightforward. Drupal 7 doesn’t ship with a WYSIWYG editor. Making content editing easier is a separate module install. Depending on how the Drupal website is setup, image uploading can be easy or hard. The end result is a significant challenge to a new team. Running a Drupal website can be far more difficult than running a social media page. 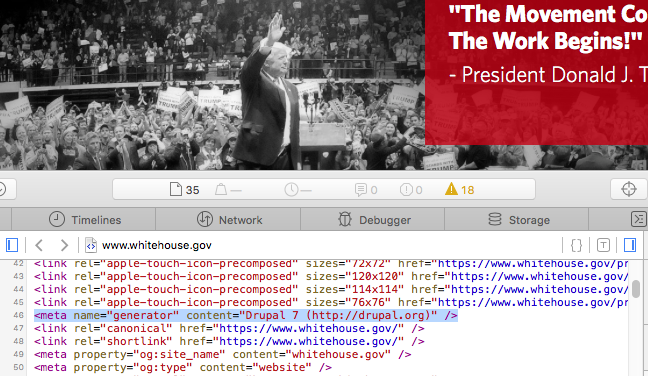 Photics.com runs on WordPress, which is a significantly more popular CMS than Drupal. However, WordPress is like a fine sports car. It’s fun and easy to drive, but you wouldn’t haul lumber in it. For basic blogging, WordPress is great. Drupal is like a truck. It is specialized for complicated governmental websites. Drupal is harder to install and maintain, but it’s way easier to customize. That puts Drupal web developers in high demand. Like Liam Neeson in Taken, it’s a particular set of skills acquired over a lifetime.

One thought on “Trump Administration Keeps Whitehouse.gov Running On Drupal”