Mobile phones are becoming more like personal assistants. With an iPhone I can schedule appointments, check my messages and do other related tasks. Although, is a smartphone good enough to replace a human worker? Computers are just machines. They don’t really care about you. They just process data. They don’t sense emotion… or do they?! Recently, I had a stunning realization that my iPhone could know my overall mood. That information is stored with recently used “emoji” icons.

If you have a newish Apple device, like an iPhone, iPad, iPod Touch or even a Mac, you should have access to the emoji characters. Basically, they’re emoticons. I use them all the time in text messages. I feel that it’s important to express my mood when sending texts. The receiver can’t see if I’m happy, frustrated or confused. I use the bright and cheerful graphics to convey emotion. 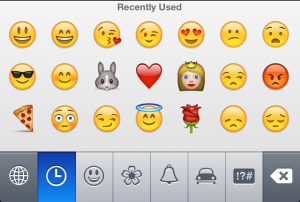 After emoji is activated, just use the virtual keyboard like normal. Although, there should be an icon at the bottom that looks like a globe. That’s how you can toggle between the different keyboards. This is where the AI emotion detection could occur. Next to the globe icon (when emoji is activated) there should be a clock icon. This is the “Recently Used” emoji. By looking at this screen, I can roughly estimate how my mood has been. I realized that my mood was improving. That’s because my top row is mostly smiley faces. The sad faces are almost off the list.

That makes me wonder, how scalable is this knowledge? Could Apple gauge the general happiness of people in the United States — or even the entire world — just based on the average of recently used emoji icons? What if a company had the pulse on the contentment of humanity? How would they use such knowledge? Could it be used for greater good? Could it be used nefariously?

The point is now I can see a general record of my happiness. It causes me to hesitate while texting. I’m not so quick to use that red/angry face. I’m trying to project a happier mood, which is not something I usually attempt in real life. This is especially unusual as I don’t think a grumpy face carries the same weight in the virtual world than the real world. Why wouldn’t I try to be a more upbeat and cheerful person in real life?

Perhaps it’s because a button on a screen is easier to press.

Photics.com ‣ Technology ‣ Does Your iPhone Know Your Mood?