After creating 500 sound effects, available for the mere price of $10, do I just kick back and relax? Do I become instantly rich? Do I get to retire to my private island? HA… no! Instead, the tedious part of game development begins — marketing. Just because I created an amazing product, it means nothing if the world doesn’t know about it. That’s the idea behind a new Photics.com  series — Free .Wav Wednesdays. At least for the immediate future, I’m planning to add a free sound effect to this website every Wednesday.

Why would I do such a crazy thing? After working really hard on the creation of these sound effects, why would I give some of them away for free? Some people have expressed concern. They want to hear some sample sound effects before dropping a Hamilton (That’s $10.) on an independent foley artist. If glowing testimonials from my customers are not enough for you to part with your money, if you require proof of my audio talent, then perhaps this series will show you that I’m not boasting. I believe that I’ve created a truly awesome sound effect for aspiring game developers.

The Free .WAV Wednesday series also gives me an opportunity to explain the intended use of these files. I created the sound effects for game developers like me. I primarily use GameSalad to create mobile games. Free .Wav Wednesday is not just a cut & paste from my sound effect collection. It’s an educational series. I’m planning to explain how to use these files in game development. This is a great opportunity for beginners. If you are just starting with GameSalad or similar game development software, this series could be most helpful. You can build an asset library while learning more about game development.

Also, considering there are 500 sound files in the collection, I would have to do this every week for almost 10 years to give away all of the sound files. I doubt that’s going to happen. But if this series becomes so successful, I imagine that I would create new sound effects during the next decade.

That was a lot of buildup for something so tiny and seemingly insignificant. Are you disappointed? The file is only 16 KB. The thumbnail image for this article is larger than that. Why would I waste so many words, fill your heart with such hope and excitement, only to disappoint you with a lousy beep sound? Don’t lose faith. There’s a reason I chose this file.

One, it’s a free sound effect. There are people paying good money for the full collection. I can’t give away my best stuff right away. I don’t see that as fair. However, this sound effect is an excellent way to learn about loops.

I believe that video games can be like art. That’s because it combines so many artistic mediums… illustrations, music, acting, storytelling… and yes, sound effects. So what does this have to do with loops? Because so much can go into a game, it’s important to save space. The Sound Effects – By Photics collection is 500 quick-hit sound effects. Most of the sound effects are under a few seconds in length. So, what do you do when you need something longer? You could create a really long sound file, or you might be able to create a loop. If you have GameSalad, it’s easy to loop your sound effects… 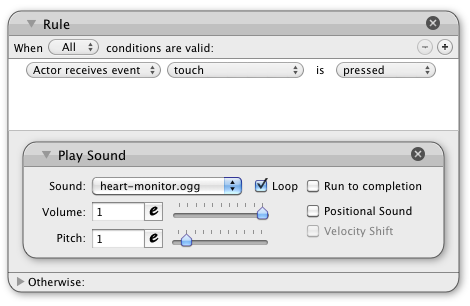 First, create an actor and give it a Rule. If the “Actor receives event” “touch” is “pressed” then… Play Sound. Use those two behaviors in order to trigger the sound effect. You could simply drag the heart-monitor.wav from the Mac Desktop and into GameSalad. Aim for the inside of the Rule. Select “Sound” while importing the sound. This will automatically create the “Play Sound” behavior with the “heart-monitor.ogg” selected for the sound. GameSalad will convert your .wav file into an .ogg file.

It’s one small sound effect, but it has more than one use. I had some fun with my pretend heart monitor. It was as if I pulled the power of Hollywood and placed it into the video game world. It was something so simple, but it was also a source of entertainment for me… eeeeeeeeeeeeeeeeeee… CODE BLUE… CODE BLUE… eeeeeeeeeeeeeeeee. Even with a tiny sound effect and two basic GameSalad behaviors, I could add drama to an actor. That’s very important with video games. It’s not just about shooting aliens. You want your players to feel emotion and you want them to enjoy the experience. Since you’re pulling from so many mediums, it’s important to understand how the audio and visual elements work together. That is how you can create a certain mood or reinforce your story. Understanding and controlling the various elements of your game design could lead to better games.

If you don’t want to wait for the next edition of “Free .WAV Wednesday”, if you want to read more about GameSalad right now, you can buy a copy of The Unofficial GameSalad Textbook. If you want more sound effects, you can purchase a license to the complete Sound Effects — By Photics collection. The free sound effect file is provided under the same license as the full sound effects collection.