I’ve been using Mac computers for about 17 years. In those early days, it never occurred to me that I would be making Mac applications. It just slowly happened. First I started making maps for Bungie’s Marathon — the precursor to Halo, then I started messing around with Adobe Flash. And now with GameSalad, it’s ridiculously easy to make apps. With the recent update to GameSalad, it’s even simple to sell / distribute those games. Support for the Mac App Store was added.

Here’s the official announcement about the GameSalad 0.9.1

While the free version of GameSalad now supports Mac App Publishing, I’m not sure what to create. I have some ideas, but nothing that shouts, “What are you waiting for Mike?!” There’s a $99 developer registration fee for the Mac App Store. That’s not exactly a huge hurdle, but it’s enough to make me pause.

Heh, pause is another feature that was added to GameSalad. Now a scene can be frozen, and another scene can be placed on top.

While trying to figure out an intelligent strategy, I updated The Unofficial GameSalad Textbook app. It now includes information for 0.9.1 and a new Index feature. Here’s a preview… 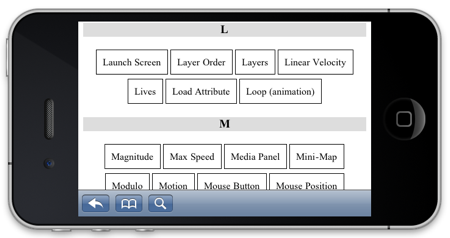 By clicking the magnifying glass icon, the Index can be displayed. Before the update appears on the iTunes App Store, Apple has to review and approve the app. I’m thinking that should happen soon.