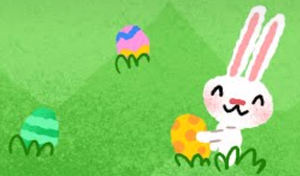 After 19 years of no recognition, Google finally posted an Easter “Doodle” on the Google.com homepage. It’s adorable – so cute! Google traditionally decorates their homepage to recognize days of significance. For Christians, Easter is right up there with Christmas. That’s why it was so controversial that Google didn’t acknowledge the holy day. Today, that changed!

That’s a screen recording of the Google Easter Doodle – in 4K!

At first I thought it was going to be another snub, but then I noticed that the “I’m feeling lucky” button was changed. The word “lucky” was replaced with an animated Easter egg. It had a smiley face and it was very playful looking. I clicked the cutesy button, which revealed the full “Doodle”. All sorts of Easter themed drawings dropped down from the top of the screen – chocolates, flowers, bunnies and more.

While this interactive display doesn’t specifically mention Jesus, there are many linked pages. The dropped drawings expand in size on mouseover. They are also “clickable”. Depending on which drawing you click, the related “Easter Traditions” page is shown.

Here’s a quote from the “Easter Egg Hunts” page…

While the egg has long been associated with new life and rebirth, Christian traditions also adopted it as a symbol of the resurrection of Jesus. A hollowed out shell is seen as a metaphor for his empty tomb, which according to the Bible was discovered by a group of women. To commemorate this, in the late 16th century the Protestant reformer Martin Luther is said to have organized egg hunts for his congregation, where men would hide eggs for women and children to find.

I did not know the historical context of Easter Egg hunts. That was enlightening and very nice to read. That’s what I like to see from Google. About a year ago, I deleted my Google account because I felt the company was not being respectful to Christians. I understand that religion can be controversial, and even upsetting to people, but why not just put some bunnies on the homepage to be friendly? This year, Google did that – and more. Very nice!

I might have to rethink how Google will fit into my longterm strategy for this website. Previously, YouTube was out of the question. Today, perhaps I should be forgiving.

Let all bitterness, and wrath, and anger, and clamour, and evil speaking, be put away from you, with all malice:

And be ye kind one to another, tenderhearted, forgiving one another, even as God for Christ’s sake hath forgiven you.

Google is not a person, but people do work there. Somehow, this Easter Doodle got created and cleared for publication. Bravo! Nice work! I have been angry towards Google. That’s why today’s Easter Doodle was extra refreshing. It remedies that bitterness.

Also, since Photics.com has many articles about web development and game development, I took a quick look at the Easter Doodle source code. As soon as I saw bunnies falling from the sky, I figured a physics engine was at work. I saw that pixi.js was listed as a script resource, but that’s a “2D WebGL Renderer”. So, I looked further into the Easter Doodle code. That’s when I found this…

Ah, that seems to suggest that Box2D was used as the physics engine. I’m not totally sure, as Google minifies and optimizes their code. I was wondering if I’d find matter.js and Tumult Hype at work, but I suppose that would have been too radical. The Easter Doodle was already a pleasant surprise.