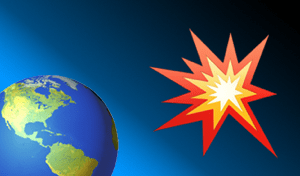 After four months of creating apps again, I realized something. This isn’t the path of success. I had learned this harsh lesson already with the creation of “BOT”, but I had to be sure. I was testing new technology and a new methodology in creating / promoting apps. Would this time be different? NO! It was a disappointment. So, what went wrong?

I anticipated trouble in getting my apps online. For the most part, Apple was reasonable with their rejections. I could understand their logic. However, when I couldn’t update Revisions for iOS, that was it – GAME OVER. I put a lot of work into the update. It would have been a much better app than it was before. Yet, Apple wouldn’t approve the update. They kept pointing me to the iBooks Store. Um, so why is there a book section in the iTunes App Store?

I tested a new advertising system. It didn’t work for me. I’m actually surprised at how ineffective it was. Over a hundred thousand ads… 70¢ profit.

When it’s cold, wet and dark outside, I don’t mind working on apps. However, it’s probably not healthy to do this all the time. I want to go outside and play! Creating apps was taking a lot longer than I thought it would – even with new tools to speed up development. All this time inside, hunched at my desk, that’s just not healthy. It’s not fun either.

It’s just too competitive of a market. I didn’t expect all of my apps to be winners, but I anticipated much better results than what I got. If I can make more money delivering pizzas, then I’m wasting my talent.

It wasn’t really a total loss. I sorta broke even. (The big loss was that I bought a new Mac, but I had been planning to buy a new computer anyway.) I learned new skills. I’m much better at Swift now. The problem was that it was not a much bigger success. It’s a nice hobby, but it’s not a business.

I’m also surprised at the difference between macOS and iOS. About 90% of the revenue was from the Mac App Store, not iOS. I might continue working on Mac development. But as far as iOS games are concerned, that’s a total waste of my time. That market is way too saturated, way too competitive.

The point is this, now I’ll be thinking of a new plan. It will have to be something that addresses these issues. It will also have to be more fun. Spring is coming. I don’t want to sit at my desk all day — every day.