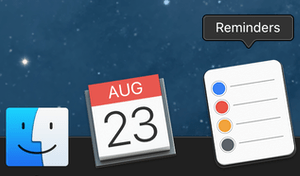 A “To-Do” list is a requested widget for the Widgets app. There was apprehension toward creating this gizmo, as Apple already has one in the Notification Center. And yet, why don’t I use it? So, I took a better look at it. I was surprised to discover the limitations. Even though the Reminders app is a permanent resident on my macOS Dock, I don’t really use it — not the widget, not the app. Is this something that can be fixed by Photics?

Apple is a two-trillion dollar company. How can one guy on Staten Island compete? Surprisingly, there’s plenty of opportunity here. After testing out Apple’s Notification widget, the lack of functionality was shocking. I couldn’t expand the information on a specific reminder. Clicking an item merely launches the Reminders app. The list in the widget didn’t even update properly. I added a bunch of new items, but only the two previous items were displayed.

My new “Groceries” items were not showing. But even if I added new items to the original “Reminders” list, nothing happened. Part of my hesitation was wondering if it was worth the effort. Why bother creating a “To-Do” list when Apple already has a Reminders widget? Well, now I know.

While future development is not guaranteed, here are features for the “Reminders” widget that are being considered…

Launching the Reminders app from the widget is not a bad idea, but it should be more polite. I don’t like apps launching unexpectedly. This is not to bash Apple. Rather, it’s to make a cool feature more usable. While experimenting with the possibilities, I tried using Siri to add a reminder — to a specific list.

It worked perfectly. That’s awesome! Even better, this is iCloud based. That means adding an item on my iPad automatically updates my Mac and my iPhone too. If the Widgets app plugs into this system, that means Apparatuses (on iOS) can automatically be updated with the same data too.

This is all theoretical. To make this a reality, there’s a lot of work to do. At least there’s a direction. One of the most challenging parts of making a widget is seeing what’s feasible and then choosing the best possibility.