It’s such a cliché in movies and TV shows, a downward ticking clock — strapped to a bomb. This staple of adventure genre has been in the classic James Bond movies and the original MacGyver series. It’s decades worth of beeping numbers. How could anything new be done? But wow, I was amazed when I watched the last two episodes of Blindspot. There were two different bomb countdown scenes, with two creative outcomes. The first one had a hysterical twist. The latter, it was an absolutely phenomenal finale. That is the way you end a show. Mind blown! 🤯

It was nice to see something different besides, “Cut the blue wire!” So, why am I telling you this? Somehow, the writers did it. They did it twice. They turned something that has been done numerous times before into something new. When working on new widgets for the Widgets app, that’s exactly the task to be done. There are plenty of stopwatches, tally counters, and countdown timers around. Why use this one? 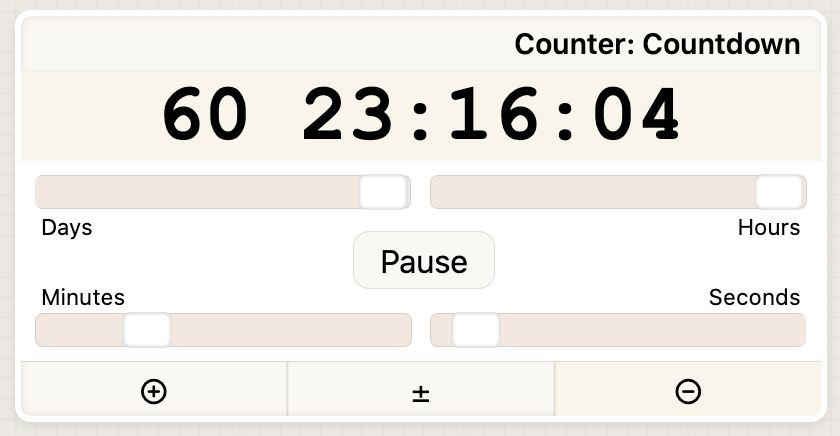 Well, part of the answer was brute force. Many physical timers, the ones that you can buy in a store, max out at 99 minutes and 99 seconds. But in the Widgets app, this one is just short of 61 days. The default timer, included with iOS, doesn’t have such range. The screenshot is from (at the time of this writing) a currently running stress test. While the counter is counting down, I figured that I could update this website. There have been lots of inquiries regarding the status and functionality of Widgets app. Creating an update seemed appropriate.

Testing this new widget represents a significant challenge. There’s not enough time in a single life to fully test it. People may or may not want to wait the full 61 days for the countdown to complete a full cycle, but they’ll definitely not want to wait the 1000+ years for the stopwatch to hit its maximum. That’s just the space in the widget. It keeps going after that.

Now you might be asking yourself, “What if your computer resets or shuts off?” The way the Counter was written, it uses timestamps. As long as the clock on your computer / device is correct, then theoretically the stopwatch should be correct. The countdown timer works in a similar way.

Although, the countdown timer still needs an alarm. Making this work on macOS and iOS requires research. In addition to discovering what’s possible, how annoying should the alarm sound? Some people want to be alerted, while others just need a gentle reminder. But while glancing at Apple’s developer documentation, there seems to be the potential to be extremely annoying. Calendar alerts, email, really? “EKAlarm” might be what I’m looking for, it might not, but some type of alert the last piece of this puzzle.

Side note — proximity alerts, that sounds interesting. Perhaps Apple’s “GeoFence-based Alarms” creates potential for another widget or even a video game.

The other major piece has already been accomplished. The goal isn’t to flood the Widgets app with a lot of junky gizmos. These three “counters” could have been added as three separate widgets. Yet, that would take up a lot of screen space for fairly similar widgets. Instead, the “Counter” widget has tabs to switch between functions. I think it’s really nice… and more importantly… it’s persistent. If you quit the app on the “Counter: Tally” screen, then that is the view that should appear when the app is reloaded.

One of the driving goals for the Widget app has been to create something that people want to use. The “Counter” seems handy. I think people will like it. This was supposed to be an “easy” addition to the app. It was supposed to be a mental break after the difficulty of the Dictionary widget. But surprisingly, a lot of thought and planning went into the creation of this new widget. There’s still some more work to do, but hopefully it will be available soon.

One thought on “Countdown to a New Widget”