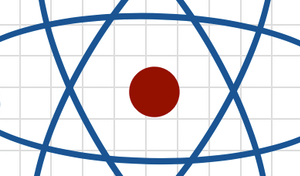 Ever look up into the night sky and try to comprehend the massive size of space? That enormity is not just outward, but inward. Just peruse the “Composition of the human body” article on Wikipedia to behold that fact. Approximately 7 x 1027 atoms are in the human body. That’s a number with a lot of zeros. This week’s free Hype template starts with only three classically illustrated atoms. But with Hype Pro “Symbols”, it easy to make many more.

In the example, the atoms are draggable. Toss one around to see two Hype Pro features in action — “Physics and “Symbols”.

While today’s computers are powerful, this little animation project is far from what is necessary to replicate reality. Instead, it’s just a fun way to show how symbols work. A Book About Hype explains in greater detail, but here’s the short version. The three animated atoms are actually created from just two symbols.

One symbol is for the electron. The animation is basically a circle that travels in an oval. That symbol can then be copied. Rotating three electron symbols, each 120° apart, creates that classical look. Those three electrons are combined to create an “atom” symbol. To represent the nucleus, a circular HTML element is added to the middle.

While Hype will crash long before you reach 7 octillion atoms, symbols can be duplicated. That’s a quick way to fill a scene with animation. And by editing a symbol, all of the copies are instantly updated.

Download the Atoms Template to see how it works.