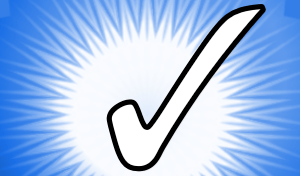 That was brutal. The “Reminder” widget was supposed to be finished in a month. Unforeseen issues doubled the development time. But the result, I like it! A lot of work went into the little details. The challenge was plugging into Apple’s environment. It was worth the effort though, as the widget is quite powerful. It even works with Siri.

While the Widgets app is meant to be helpful to customers, there’s certainly a degree of selfishness involved. Sure, I’m building an app for others to enjoy, but Widgets is an app that I want to use too! Even though others may have been wanting a “To-Do” list widget, the “Reminders” widget was a personal objective. I wanted a “To-Do” list too! It should have been available at launch but… well… it was difficult! Fortunately, a lot has been learned since this project first started. 16 months later, wow, the Widgets app is getting better.

How the widget handles sorting is an example. By default, the reminders are sorted by the target day. But with the priority issue solved, those red exclamation points can be placed in their proper order. It’s just a press of the double-exclamation point button to change the sort. Being able to quick check items as complete is a critical feature. That allows reminders to be sorted by completion too. Completed items are either hidden from view or shown at the end of the list.

Did you know that Apple lets you sort reminders by categories? It was a surprise to me, as I used to just lump everything in the default category. If you do use categories, the widget can arrange reminders appropriately. 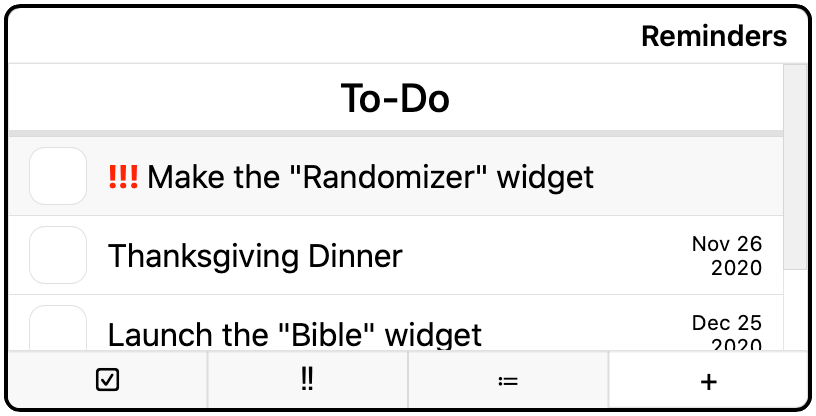 That’s why I changed the name of my default category. It’s called “To-Do”. Now it looks more like a traditional “To-Do” list. Unfortunately, that change was not something I could do from the widget. Apple’s Reminders app is still required for many tasks. This widget is the first example of the Widgets app editing user data. That’s why development is progressing with caution. You can create a basic reminder from the widget, you can also mark a reminder as complete. But beyond that, it’s wait and see. Should the widget edit reminders? Should the widget delete reminders? The answers to those questions greatly depends on feedback from customers. If many nice reviews appear, complementing the functionality of the “Reminders” widget, then it’s apparent that further development is warranted.

But even if not, there’s obvious feedback. “Nice widget, but I’d really like to set the date when creating events.” I’m expecting a few people to mention that. While future development is not guaranteed, the feature set for the widget is not considered complete. Friendly feedback can significantly influence the direction of this app.

It’s surprising how deep this rabbit hole goes. Creating and editing reminders is deceptively complicated. A whole app, some costing several times more than the price of the Widgets app, can be focused on just reminders.

The inspiration for this app is a multitool. It’s something like the Wallet Ninja, but digital. The problem with multitools is that each tool doesn’t replace the strength of a dedicated tool. Does that limitation have to exist for software? Perhaps no. I’ve already removed Apple’s “Reminders” app from my dock.

Looking at the collection of widgets so far, it’s hard for me to pick a favorite. While there is room for improvement, many of the widgets are quite strong. I use the Widgets app far more than any multitool I’ve ever owned. (Although, you’re a close second “Mr. 7-Hands”.) Almost every day, I’m checking the weather. That “Calculator” widget is handy. The “Unit Converter” is essential. The craftsmanship of the “Counter” widget makes me smile. The “System Stats” widget helps me to prevent my devices from overheating and it constantly reminds me of my limited storage space. There’s a lot of utility here.

Like a plant, this project is growing slowly. But also like a plant, it’s amazing to watch it grow.  If things go according to plan, development will continue for years. Even now, the app is at a significant crossroads. How will Apple’s WidgetKit factor into the growth of this app? I’m not sure, but new ideas are cooking up.