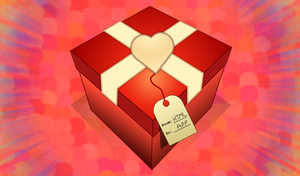 Happy Valentine’s Day! This post has a multipurpose. First, it’s a nice way to celebrate the holiday. I didn’t plan to announce the “Wrapping” app on Valentine’s Day. It just turned out that way. But since the app icon has a nice heart on top, I figured that I could combine the two events. The plan to launch the app about a week ago. Needless to say, it’s been a rough week. That leads to the theme of this post. Does Apple truly love developers?

I didn’t have to do this to myself. I didn’t have to spend my days, and my evenings, struggling to understand the intricacies of AppleScript and Swift. Out of all the possible projects that I could have done with Photics.com, I chose app development and I chose to focus on Apple’s App Stores. Why?

Well, money is an obvious first answer. With my apps, games and books, the most success was found on the inside of Apple’s walled garden. Yet, it’s more than that. I like Apple as a company. Out of the big five tech companies… including Google, Facebook, Microsoft and Amazon …Apple is the only one that I like. As a user of Apple products, I’ve been very satisfied with my Mac Mini, my iPhone and my iPad. But as a developer, wow, it’s been tough.

The first problem is with Mac hardware. As much as Apple touts the iPad as a desktop / laptop replacement, it’s not! Without the Mac lineup of personal computers, the iPad wouldn’t exist. Xcode is needed to make iOS apps and the iPad doesn’t run Xcode. That means I need a good Mac to stay competitive in this profession. Unfortunately, I prefer the Mac Mini. That computer hasn’t been updated since 2014. The last good update was 2012. That’s an eon in the computer biz. I’ve been tempted to just give up on Apple, buy a nice NUC and go full Linux.

Doesn’t Apple love developers? Why are they making it so hard to buy a simple desktop computer? I haven’t been wowed by Mac hardware in quite a while. (I like the new iMac, both the standard 27″ and the pro, but I don’t want an all-in-one computers.) I’m not sure. Maybe something big is brewing behind the scenes. There has to be a reason the Mac Mini has been neglected for so long. Doesn’t Apple care about developers? If they can’t get access to affordable Mac hardware, who will make the apps?

While working on the “Wrapping” app, I was fumbling with Mac hardware. (I bought and returned a Macbook Air. It was broken out-of-the-box.) That was only the beginning of the troubles. The real issue occurred when I wrote the first version of the “Wrapping” app. It was programmed in AppleScript – nice and easy. The script did exactly what I wanted and it could be ported to an App via Xcode.

That app was promptly rejected.

The problem was sandboxing. It’s a known issue for the Mac App Store and it’s been driving developers nuts for years. I understood it was a problem. I had seen big apps leave the app store. Yet, it’s truly a different matter when you experience it firsthand. Wow, I was livid. My app worked. I had put a lot of time into creating it. The App was mostly sandboxed, but it needed two exceptions for some read/write tasks. Apple did not care! REJECTED!

That’s part of the stress in creating for the App Store. You’re not quite sure if Apple will approve or reject the app. They’re like meteors smashing against the hull of the 10-year plan spaceship. The “Circles with Grandma” project got hit with two rejections (one on iOS and one on Mac) and “Wrapping” got hit twice. I estimate that’s about a full work week in time lost. So yeah, the 10-year plan is slightly behind schedule.

There are so many app developers out there. Why would Apple care about Photics? Why should Apple care about Photics? After the rage subsides, the mind can think clearly. Each of the rejections was not without merit. It’s not like Apple was arbitrarily rejecting my apps. There were legitimate problems. And by addressing each issue, I became a better developer. So while it is taking slightly longer to hit the project goals, I’m so much better of a designer and developer as a result of it.